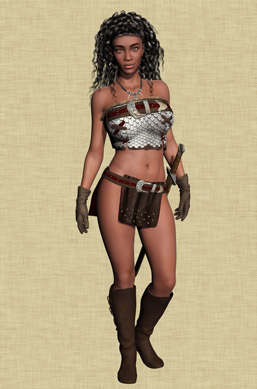 Alektra was born into the Ushari clan of North West Africa. The Ushari are famed navigators who have sailed all over the world. Alektra spent her formative years being taught sailing lore that had been passed down through the generations of her people.

Her birth name is Itsi which means ‘small’. Standing at five foot nine inches, she is a whole foot shorter than the average woman of her clan. It is said that the Ushari’s ancestors were giants because they are so tall. The average height of Ushari men and women is seven foot tall.

Having completed her navigation training, Itsi was sent to Atlantis to represent her clan in the prestigious service of the Temple of Magic. Her tribe mother then renamed her Alektra, an Atlantean girl’s name, because she would no longer serve her clan, but the Atlantean priestesses. She serves the temple as a privateer; piloting temple sword maidens on missions to locate and bring back magic items to the temple where they are kept out of the hands of common people. Alektra reports directly to the current high priestess of the temple of magic.

Currently, Alektra has been assigned to help a mixed group of maidens who endeavor to capture the fugitive sorceress Sapphriss. It is an adventure that will change Alektra’s life forever.

The high priestess of the temple of magic gifted Alektra with the Necklace of Ptih which gives its wearer enhanced strength and agility.