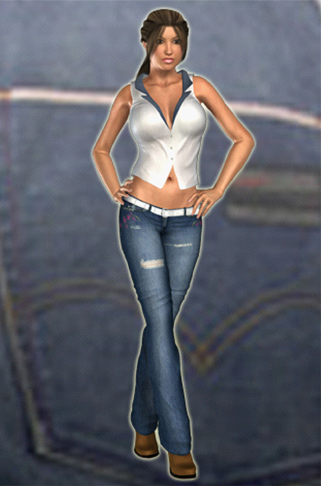 April Andrews is the younger stepsister of Marvin Quimby. Her mother, Sandy, remarried when April was nearly out of high school and Marvin was finishing up college. The merging of households did not go smoothly, mainly since April was a very smart, beautiful, popular young girl and Marvin was a nerdy, social inept recluse who refused to find a place of his own to move into.

April had a habit of using her sensuality to tease her stepbrother, taunting him with forbidden fruit just to get under his skin. Despite this, April has grown to appreciate her new sibling, even if he has a darker side even she is unaware of. Their love-hate relationship was on full display when they teamed with Grrl Power members Snowflake and Solaria to track down and rescue Sandy, who had been temporarily transformed into a LiveDoll by Mr. Plastic and Polly Vinyl.

April is a classmate of Tim Ingram and Jill Royal at Metrobay University, and got an up close look at the potential for Tim’s antisocial behavior when she was unwillingly fitted with a mind control device by MONA while the robot was under Tim’s control. She has also been secretly converted into a Graybot – by her own mother, no less – although she retains no memory of this in her day-to-day life.

Along with the rest of her family, April is next-door neighbors with Liz and Lorenzo Trance, as well as good friends with Metrobay U. classmates Tabitha Essex and Gus Manley. Like her mother, April is an avid exercise enthusiast, and was working out at the campus gym when she and her friends were accosted by Lady Swine – under the influence of the gluttony gem – and temporarily turned into a voluptuous pig girl.

Notable Appearances: The Girl Next Door, Convert Another, Love Program #9, Sins of the Seven, LiveDolls