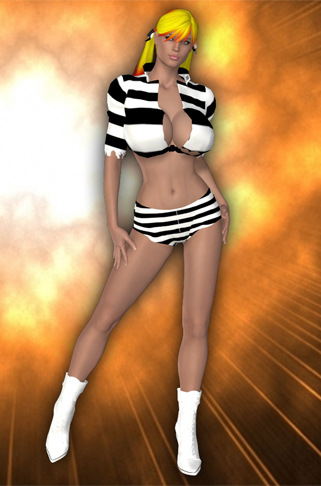 Bambi “Boom Boom” Bambino was the daughter of one of Metrobay’s biggest mafia ganglords. She grew up in the lap of luxury obtained by ill-gotten means and looked up to her father, “Bang Bang” Bambino, who spoiled and lavished all his love and care upon her.

When she was older, she began to take on jobs in the family business. By then, she’d grown into a statuesque bombshell, whom the other mobsters took to calling “Boom Boom” for her explosive personality and bombshell body.

Her nickname took on a whole new meaning when she reached physical maturity and her latent superpowers were activated. Bambi soon found that enough adrenaline and excitement could literally cause her to explode with passion, sending highly destructive combustible blasts out of her very body and destroying anything around her. Her father was quick to put these talents to good use in dealing with mafia rivals, and she soon developed a fearsome reputation.

Her family’s crime spree and dominance in Metrobay came to an end when her father made the unwise decision to defy an even bigger fish in the pond: Max Indeks. The Bambino Mafia soon found their allies dwindling and their territory encroached by rival gangs that had Max’s backing. This culminated in “Bang Bang” Bambino meeting an untimely end while Bambi sought asylum with the Metrobay Police Department, who locked the combustible cutie in the Funhouse and put her on hormone-dampening drugs to prevent her from getting too excited and blowing the place up.

Bambi ultimately began to regret her decision and despised the safety of prison walls. More than that, the lack of excitement and the lack of sexual passion afforded to her began to drive her mad with boredom. A fellow prisoner named Bugeyez, however, decided to use her in his escape attempt and was true to his word, taking her and a nearly comatose Diddler with him as they fled the heavily secure jailhouse. Bambi tagged along as Bugeyez rendezvoused with Madame Mynx, and then witnessed Mynx being betrayed by The Diddler. Fellow villain Bronk took a shining to her, and she took a shining to Bronk, and when Bronk began to make his escape before the heroines arrived, he took Bambi with him. The two began to get intimate, but Bronk was unaware of her powers. Upon peak arousal, Bambi exploded, and only Bronk’s own superhuman strength prevented him from a grisly end. Bambi then escaped with Bugeyez, the two villains remaining at large.