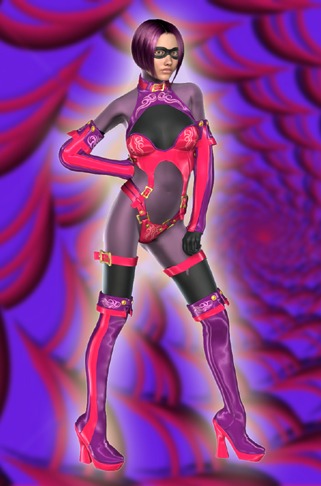 Mallory was always a headstrong girl who thought she was right all the time. With her superhuman powers of kinetic energy repulsion she decided she would fight crime. Although a junior member of Grrl Power, she believed the way superheroines had been fighting crime up until now was completely stupid. She was smarter than those ‘Barbie Doll bimbos” as she would call other superheroines. She called herself Bounce and was determined to show the world how true crimefighting was done.

Bounce’s first task as a Grrl Power member was to accompany Ms. Metrobay to Hooter County ( Sex Pets of the Wild West ). Bounce was miffed that Invincible Girl and Gallant Lass, two ‘Barbie Doll’ heroines, were joining along. But this was Bounce’s opportunity to outdo the ‘blonde airheads’ and start her crimefighting career out right. 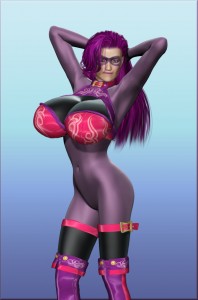 Unfortunately, the train ride was a trap and Bounce, along with the other heroines, was knocked unconscious when their cabin filled with sleepy gas. When awaking, Bounce blamed the ‘blonde airhead’ superheroines for leading her into the trap as well. But Bounce had no way of knowing that her crimefighting career would now take a extreme turn. Because in the cruel care of villainess Lady Luck, Bounce was to be the test subject of a transformation process conducted by another villain named Moneyshot. Enduring a shameful ordeal on a mechanical bull, Bounce was transformed body and mind into a kind of ‘airhead bimbo’ she had always despised.

Her once serious demeanor was now that of a sex crazed bimbo. Her future as a crimefighter now seems uncertain.