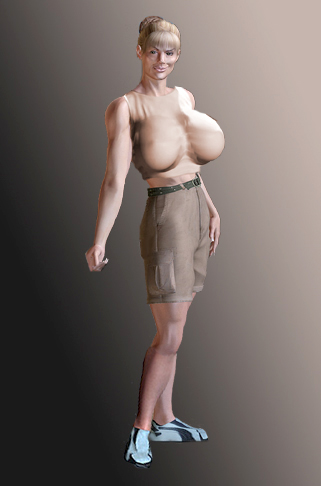 Brunhilda Olgavitch Krammpacher was an Austrian soldier turned bodybuilder who came to the states to showcase to the free world her magnificent, amazonian physique. Sadly, she also showed the world that she was a Grade-A cheater and failed just about every test for steroids and illegal body supplements.

Universally shamed and banned from competitions, Brunhilda was easy prey for Max Indeks to hire as a low level strong-arm to push around those who got in his way. Brunhilda, no stranger to corrupt measures and dirty dealings, eagerly took a job working for the Circle of ROPE to showcase her unique skills. She even underwent experimental strength enhancements, similar to The Boyz member Bronk.

Brunhilda was assigned to train fresh young female slaves for ROPE’s enjoyment under the pretense of being a physical trainer at Metrobay University. She proved to be a sadistic and effective trainer, breaking otherwise sweet and innocent young girls and turning them into submissive, docile sex slaves for members of ROPE to enjoy at their leisure. The slavery cartel was exposed by the young police cadet member Crissy Tanner, whose powers negated her own super strength.

Brunhilda was apprehended by the Superheroine Squad and incarcerated at The Funhouse. She has been replaced as ROPE’s muscle by the more effective and obedient Super Freak, rendering her services no longer necessary. 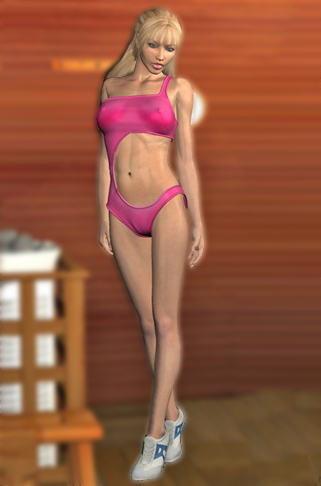 While in prison, she was slowly weaned off her dependence of illegal muscle enhancers and her radioactively-endowed physique began to dissipate, returning her to a more modest body shape and leaner figure. She continued to train hard in prison and retained a svelte, athletic build and a side-affect of her previous radiation therapy has resulted in bestowing upon her a body that appears far younger than her given age would imply.

Soon after her release from prison, Brunhilda was offered a job as the lead health instructor at the newest fitness gym in Metrobay, Club Pump, which was run by a wealthy fitness nut named Lance Hardwood. The gym was shown to be a cover for yet another human slavery business, of which Brunhilda is a key participant. Acting as Lance’s right-hand woman, Brunhilda was revealed to have been an unwilling accomplice, enticed by his charms and ultimately enslaved by his Thrallium-gas device.

As part of her role with Club Pump, Brunhilda was tasked with helping Lance enslave the entire Speed Demon team. The heroines were freed along the way, but to Lance’s luck, and Brunhilda’s misfortune, the heroines only remembered Brunhilda’s participation. Lance successfully framed the entire operation on Brunhilda, who was taken away in police custody.

Brunhilda is noticeably distinguishable by her tall stature and very thick accent. A proud Austrian, she is often upset when others misinterpret her accent for another nationality. To her chagrin, she’s routinely been called German, Russian, Swedish, and, in one particular case, Scandinavian.

Brunhilda has augmented her body with every strength stimulus known to man. When that wasn’t enough, she submitted to a strength enhancing procedure via volatile radiation therapy. Her new strength made her more than a match for even the strongest normal man, and at her peak it was said she possessed the strength of ten men.