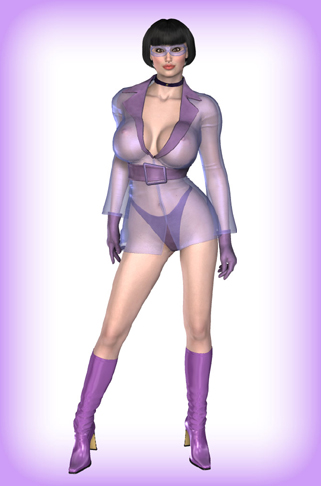 Delisha Deelite was a spoiled little girl, prone to outrageous and embarrassing temper tantrums as a child and in desperate need of some good ol’ fashioned discipline. It never happened, and Delisha grew up to be a bratty, bitchy snob. In otherwords, a perfect candidate for R.O.P.E.

Delisha was the understudy of Madame Mynx and would-be heir to her criminal empire, though she always found herself passed over in favor of Clawdette. When Clawdette developed a conscience and decided to reform, Delisha gladly stepped up to show her boss she had what it takes.

Delisha managed to kidnap Clawdette and blackmail her junior partner Motorcycle Girl into freeing Madame Mynx from prison, a success that earned her a swift promotion in Madame Mynx’s inner circle.

She then later joined Chef Pasty in a caper that saw Pink Pussycat being shrunk to itty bitty kitty size. But once again the superheroines foiled the villains and sent them to prison.

However, later assignments proved far more difficult for her to handle and she again found herself competing for Madame Mynx’s attention against her newest star underling, Preston Prescott.

Delisha is currently incarcerated inside Metrobay Prison under the watchful eye of Warden Smith. She had previously been seen socializing with Emile Gross, though the exact nature of their relationship is not known at this time.