Fingers was one of the managers of Bronk during his heyday as a wrestling sensation. He was also the one responsible for acquiring him with many illegal forms of steroids, an act that caused Bronk and everyone else responsible to be permanently suspended and blacklisted from every major entertainment venue.

After this, Fingers was a pickpocket for a time, though quickly developed a fetish for finger foreplay soon after. He was recruited by Max Indeks and put to work as a thug-for-hire, doing any dirty job that needed to be done in exchange for money, power, and women. He and the rest of The Boyz are often the first, and cheapest, hired-hands for any task the higher-ups feel is beneath them or too risky.

Fingers tends to be the one to handle the more delicate aspects of an operation, the opposite to Bronk’s blunt physical thuggishness. Fingers is capable of hacking computers, breaking into locked vaults, and expertly setting up many of the devious traps and gear they use in their daily missions. He is also arguably the most perverse and sexually outgoing member of the group. 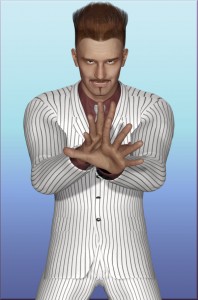