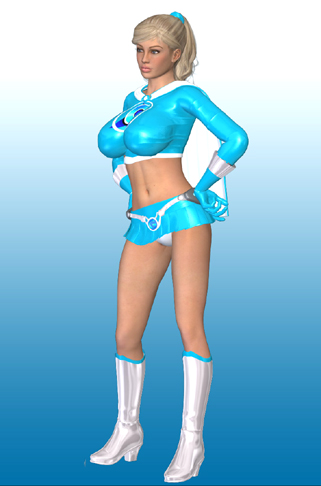 Small-town girl Tori Travayle is fairly new to the city, having received a full sports scholarship to Metrobay University. It was her uncle Turk Travayle who brought Tori to the attention of MU’s dive team coach. A taxi driver, Turk hears all the city gossip from his passengers. When he heard that MU’s dive team had lost in a competition to their rival Sunnydale University for the fifth straight year, Turk knew just the remedy. Out in the little country town of Fairfield, Tori was a little known diving phenom. Turk had MU’s dive coach, Shandra ‘Kicks’ Pace, come out to Fairfield and watch Tori perform dives. Blown away by Tori’s near perfect plunges, Coach Pace instantly offered Tori a full ride at MU.

During this time, Tori attracted a secret admirer, the villainous criminal Dipstick. She and several other girls were kidnapped and held captive at R.O.P.E. mansion, while she was tied to a machine powering the mindsweeper device. When the power overloaded, Tori was flooded with highly unstable energy and, to her shock and surprise, was able to slip out of her shackles and even through the floor itself. Bestowed with the superpowers to manipulate the density of her body, Tori suddenly found a brand new way to help her diving career.

When her mother learned of Tori’s new abilities, she cautioned Tori to hide her superpowers from others. Her mother feared that Tori would be seen as a freak and so wanted to protect her daughter from harmful attention. But Tori’s parents could not afford college tuition and she always dreamed of getting a degree and making enough money to help her parents through their retirement years. The Metrobay University scholarship answered her prayers, but she had no problems about using her secret powers to assist her diving career. Using her powers, she was able to phase through the water like a ghost, leaving almost no trace of a splash behind. Two years after joining the team, the Metrobay Wildcat’s diving team is undefeated, all thanks to Tori’s nearly perfect dives.

Tori could actually dive without making any splash, but she tweaks her density as her feet enter the water to cause a small ripple so as not to seem to defy the laws of physics to onlookers. She wasn’t able to fool everyone though.

The gynoid superheroine Mechana had been attending numerous sports and entertainment events to study human interaction. She was invited by a few junior superheroines to watch Tori compete in the diving competition and took them up on their offer. However, Mechana observed something peculiar about Tori during her performance. With her computerized brain, Mechana was able to determine Tori’s weight by how much she bent the diving board. Mechana then calculated the theoretical splash based on Tori’s angle of descent. Observing that Tori’s splash didn’t correspond with expected splash results, Mechana reported her findings to Ms. Metrobay. 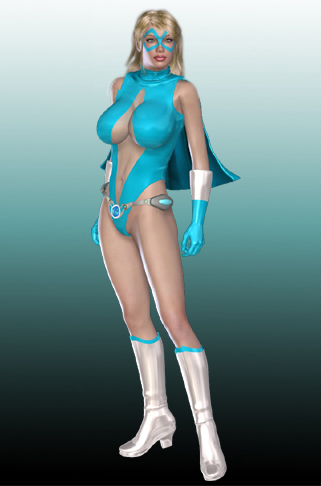 Ms. Metrobay turned to the Superheroine Squad libraries and in the archives found the proof to match her hunch that Tori might have inherited her super abilities, which were triggered by her experiences at R.O.P.E. mansion. In fact Tori was the granddaughter of Nicoli Travayle and a certain Madison Mayes. Madison was none other than the original Dare Damsel, a heroine whom Ms. Metrobay had fought crime with shoulder to shoulder for many years. Now her granddaughter had arrived in the city with powers that similarly seemed incredible according to Mechana’s description.

Such powers in the hands of R.O.P.E. could be very dangerous. At the same time, Ms. Metrobay could not force Tori to join the Superheroine Squad, but she had to try at the very least. She decided to have one of the Grrl Power members befriend Tori. Reluctantly, Tabby ( Kitten ) accepted the task. Similarly, the heroine Valiant Woman took an interest in the girl and accepted her as a sidekick and member in her new team, the Guardian Girls, to serve as a mentor and friend to the inexperienced heroine. Taking the name “Gallant Lass”, Tori was more than eager to join the heroines of Metrobay and prove her worth.

A social and friendly woman, Tori’s friendliness puts others at ease. She has revealed she is in a relationship with a boyfriend and frequently spends time with Tabby and the Grrl Power cadets. She does seem jealous of the beauty and attention that heroine Invincible Girl attracts. She has expressed great admiration for the heroine Nightengale, however.

The Metrobay Press have dubbed her ‘The Untouchable Gallant Lass” because of her superpowers.

Powers
Gallant Lass can control the density of her own body as well as objects and people she touches. This power allows her to be as heavy or light as she desires. By making herself extremely dense, she can break through walls like a wrecking ball. Causing her body to have no density, she can simply walk through walls like a ghost. By alternating her density, she can fly by gliding through the air; heavier to dive, lighter than air to rise. When her body becomes extremely dense it gives her physical armour, invulnerable to bullets, explosions, etc. When she’s at zero density, then projectiles and blasts go right through her without touching her.

It is hypothesized that at extremely high density her body can even block/deflect radiation; such as x-rays. Just as do heavy metals like lead.