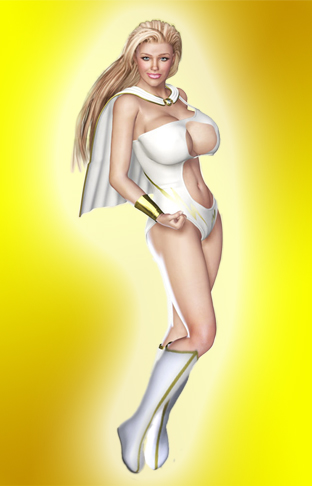 Invincible Girl may come across as just another powerful and moral heroine like the rest of the noble Superheroine Squad, but her origins are far more impressive.

Descendant from an ageless race of powerful gods and goddesses, Invincible Girl was the patron goddess of morality, purity, and decency. Unfortunately, she was caught up in a war between the immortals. She was the last in the lineage of the venerable “Old Gods”, but her people were ultimately defeated and their rule overthrown by the upstart and corrupt “New Gods”. Refusing to bow and serve her new masters, the New Gods saw fit to punish her for her insubordination and cast her to the realm of mortals, stripping her of her powers and immortality.

One concession was made to her; if she could prove herself in the realm of men and earn the New Gods’ favor through works of attrition and selflessness, they promised to reinstate her position in the heavens. Her powers were woven into a special uniform, intentionally chosen for its provocative and exploitative appearance, but while wearing it she would regain her lost powers and godlike abilities. Without it, she would be as weak as any mortal. 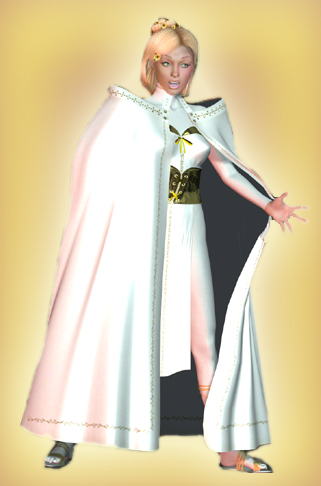 Using her powers to become a heroine and naming herself “Invincible Girl”, she originally took up residence in the corrupt metropolis of Sterling City. Almost single-handily she cleaned the city of its corruption, mutants, and supervillains. When she received news of the dire state of the city of Metrobay, she immigrated there with the hopes of repeating her generous good deeds, proving her valor, and quickly ridding the town of its vermin and villainy.

However, Metrobay proved to be a far more difficult place to clean up than she anticipated. The villains she had faced before were brutes and monsters, but in Metrobay they were dignitaries, diplomats, and deviant geniuses that were more than capable of outwitting her and exploiting her weaknesses. As a goddess of purity, she found her powers weakened by the impure taint that permeated the city, and she slowly began to realize her noble venture to purify Metrobay might not be so quick and easy.

Despite her vast powers, Invincible Girl possesses her own character flaws. As a goddess, she struggles to accept the help and kindness of mere mortals and often feels she is above them. She is difficult to work with, preferring to do things on her own and at times rejecting help from others. Her pride is her biggest weakness and one of the stipulations for her to reach ascension is for her to learn humility, a trait entirely alien to her.

Though prideful, she is of pure heart and intention. Much of what others perceive as “coldness” and “rudeness” is purely her unfamiliarity with the world of mortals and of the jarring shift she has undergone upon losing her status as a revered goddess. Still, she is respected and admired, earning the nickname of “the Angel of Justice”, and she has proven her worth on more than a few occasions. It remains to be seen if her accomplishments will go to her head, or if her time amongst the mortals will instill in her the virtues she never knew she could possess.

Powers
True to her goddess status, Invincible Girl is blessed with a variety of superpowers and abilities that far outclass those of any mortal man, and even some superheroines. She can take to the skies and fly as fast as the wind at her leisure and possesses the inhuman strength and stamina to destroy a tank with her bare hands. She posses other abilities, including energy manipulation and enhanced speed and reflexes. Her powers are integrated in the costume she wears, and without it she loses these abilities and reverts to that of an average human being.