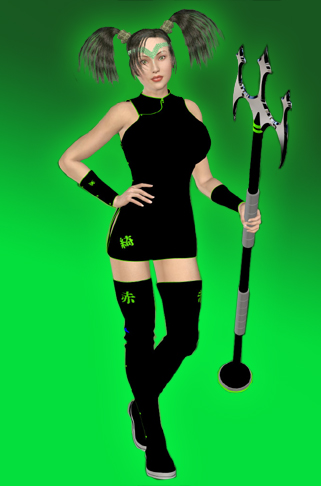 “In ancient times,” said Confucius, “men found the likeness of all excellent qualities in jade. Soft, smooth, and glossy, it appeared to them like benevolence. Fine, compact and strong – like intelligence. Angular, but not sharp and cutting – like righteousness.”

Who would have guessed that 2,500 years later those sage teachings could also apply to the superheroine known as Jade Lightning? Beneath this petite and delicate exterior beats the noble heart of a woman who is always searching for peace yet is unafraid to fight for it.

A native of China, this vision of beauty was destined from birth to one day become Jade Lightning, bearer of the Green Power Gems and mistress of thunder and lightning. She inherited the role from her mother, the former Jade Lightning.

Xiuying was actually raised by her aunt and uncle under the belief that her parents were dead. On the contrary, her father was a military man and her mother a famed superhero, and they deemed it best that she be raised away from them to keep her from harm lest any of their adversaries target her or use her to their advantage.

When she was of proper age, her mother returned and announced that Xiuying would be her successor. Feeling overwhelmed by this revelation and the responsibility thrust upon her, she took two years off and traveled throughout Asia to learn about philosophy, martial arts, and life in general. She learned to speak fluent Japanese and English and it is implied that during her travels Jade Lightning and Brown Sugar both studied martial arts under the same sensei during Brown Sugar’s journeys overseas. Their martial arts instructor was Sakura Hyuga, otherwise known as the League of Liberty heroine Duality Dame. It is implied she met many other martial arts-skilled heroines, possibly including the likes of Legion of Superheroine’s Scarlet Lotus.

After learning all she felt she could learn, she returned home to China, took up the mantle of Jade Lightning, and joined the Asian heroine squad, the Gem Angels. Alongside her fellow Gem Angels she fought crime in her homeland until coming stateside in an exchange program designed to encourage peace and justice across the seas. Her best friend, Crystal Cyclone, followed her example and joined her in Metrobay some time later.

Xiuying now battles the forces of evil as a member of the Superheroine Squad, and in her secret identity as a graduate student at Metrobay University she is occasionally called upon to work with the Grrl Power unit when they are in need of a little extra firepower.

Jade Lightning has proven that good things come in small packages, and her electricity based powers are nothing to scoff at. She occasionally uses her Lightning Rod trident staff as both a vessel to channel her powers as well as a melee weapon, though she is capable of electrical attacks without it.

Jade Lightning was one of the first heroines kidnapped and converted by the android Sentius into a mindless H.E.R. drone, and was immediately tasked with converting her friend Brown Sugar, which she did without hesitation. She appeared to be one of the more dominant controlunits, giving out more orders and commands than all the other controlunits, which may speak either to her own initiative or Sentius’s preferences. She is also moderately infamous for uttering the memorable line, “my ass requires reformatting” during a group pleasure session.

Jade and the other captive heroines were eventually freed, and she has since returned to active duty. She has teamed with Valient Grrl on missions and notably rescued Solaria and Snowflake from The Boyz with very little difficulty.

She was recently teamed with Snowflake to try and instill some discipline into the younger crimefighter, a task Jade Lightning seemed more than eager to carry out. Recently, the two heroines were mysteriously sucked into a parallel dimension while out on patrol and found themselves in a hostile environment in the parallel universe of Platinum Earth. Faced with the threat of evil aliens, diabolical megalomaniacs, and evil robots, Jade has struggled to help this new world while finding a way home. She did form a close bond with Platinum Earth heroine Shrike, whom she viewed as a kindred spirit. Her troubles were exacerbated when Snowflake was captured and brainwashed into opposing her in an misguided attempt to send them home. Fortunately, Jade was able to destroy the enemy core with a concentrated EMP pulse, but the exertion has left her drained and weak with an army of enemies surrounding her.

She was eventually taken by a hive-controlled Brown Sugar and forcefully infected with the hive virus, converting her into just another drone slave for the hive, just like her friends. Ultimately, she was saved and freed by the combined efforts of the Platinum Earth and Superheroine Squad heroines, restored to her proper mind and body, and returned to Metrobay alongside the other captured women.

During the events of the Night of the Drones she showed she can be less than confident when the balance of power shifts in the other direction. Despite this, she remains one of the more powerful heroines on the squad and easily one of the more unique and likable.

The Power Gems that Jade Lightning possesses are mystical in nature, giving her control over the elements of lightning and electricity. Without physical contact with the gems, she is powerless. Her electricity powers are very potent, however, capable of generating everything from a pleasurable tingle to a heart-stopping blast capable of demolishing solid brick walls.

She maintains an ever-present static charge, which also has the unfortunate side effect of shocking others she comes in contact with if she forgets to buffer her abilities.