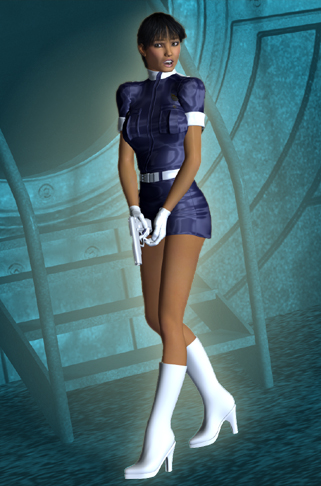 Jiang “Jenny” Han is an officer in the Metrobay Police Department. She is the daughter of second generation Chinese immigrants and the youngest of two sisters, the older of whom, Vanessa, is a special forces Femcop officer in Liberty Grove, where they were both born and raised.

Jenny, meanwhile, wanted to branch out and earn some independence apart from her sister and family and so she moved to Metrobay soon after high school and, like her sister, became a public servant dedicated to apprehending the city’s many rampaging criminals.

Officer Han was one of a few officers that responded to a distress call from heroine RollerGrrl to investigate the shady Club Pump. While its owner, Lance Hardwood, pretended to comply with the investigation, once he was alone with Officer Han he attacked her and injected her with a highly concentrated dose of the mind-altering chemical thrallium. Convincted by him to drop her investigation, Jenny claimed that there was no suspicious activity in her official report and was compelled to join the club as a lifetime member.

However, Lance found a scapegoat with his brainwashed ex-con servant, Brunhilda Krammpacher, and started up his operation again, permanently brainwashing a few lingering victims of the original club, including DareDoll, Haley Swift, the Red Cardinals, and Officer Han herself. She now goes about her daily business, enslaved to his will but unaware of his control and influence over her until he calls and demands her services, upon which she will gladly drop everything and obey him without question.

In private, she is good friends with fellow cops Daisy Sanchez, Mick Jones, and Maggie MacGilleycuddy and she keeps in touch with her sister back home frequently. She nurses a small crush on her captain, Chief Coleman, but for the most part manages to put that aside when a job needs to be done.