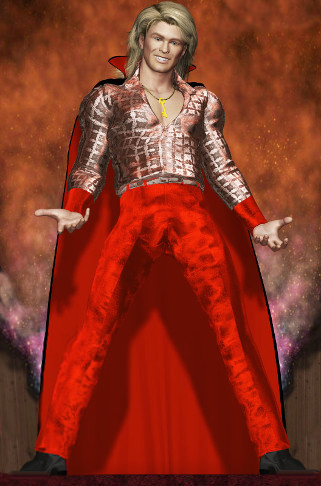 HISTORY: Riberto was a exceedingly bright but unattractive young lad, youngest of eight children born to an upper class German family that were members of the international branch of R.O.P.E. He wanted for nothing growing up and indulged himself in a voracious appetite for fantastic literature, especially magic. Having no need to work after graduation, he continued this obsession, travelling Europe to various sites of mystic lore. Somewhere in his travels he encountered a tract about the Philosopher’s Key, an item of great power that had the ability to unlock potential and guide one to the secrets of the universe itself.

No one knows what trials and troubles the young man encountered on his journey but when he came back home he was no longer short and dumpy but tall, handsome, and charismatic with the Key in hand. He also had three magical automatons (named Sally, Simone, and Bimbo or Sim Sala Bim for short), supposedly creations of the famed Robert-Houdin himself, that were now his intimate companions. Shortly thereafter he embarked on a career as a stage magician (which he’d had some skill at as a young boy) and became a celebrated stage performer.

But the accolades of the crowd soon ceased to thrill him so he took up crime as a way of amusing himself and exercising his power. An opportunity to take up his father’s membership in R.O.P.E. brought him to Metrobay. (The rumor that meetings with the lovely Vivian Indeks led to support for his application is surely just malicious slander…) He searches for something in Metrobay but only he knows what….

POWERS: Riberto is first and foremost a scholar possessed of an astounding body of lore in the oddest things. His foremost area of expertise though is magic, both stagecraft and “real” which has led to careers both on the stage as a performer and as a criminal stealing items or books to increase his spellcrafting knowledge. He’s crossed swords before with the Deutschland Dynamo and British Bolt, getting the better of both of them.

His primary tool though is a mystic item of lore called the Philosopher’s Key which “unlocks the nature of the universe, of reality and illusion, of mind and body, to my control”. Exactly what the limitations and exact powers of this potent artifact are is unknown to all except Schlüssel, though any mage would take just out of principle.