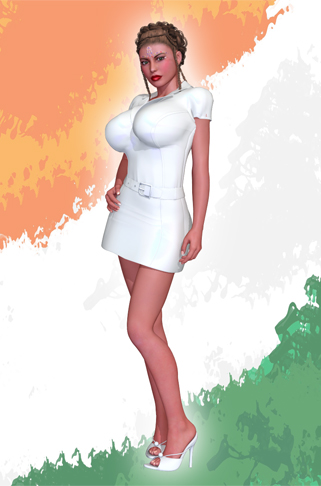 Kuria Nadvi grew up in a very traditional Hindu family, the daughter of immigrants hailing from India who came to Metrobay to start a new life for themselves.

A gifted student with a strong desire to help others in need, Kuria worked her way through medical school before landing a position as one of the premiere doctors of the Malroth Memorial Hospital, where she quickly developed a reputation as a literal miracle worker. Word spread quickly that patients of Dr. Nadvi had the highest chance of making complete recoveries, even in the most hopeless and dire of cases.

The truth was that Dr. Nadvi harbored a secret gift of her own – the ability to heal others through skin-to-skin contact. While her powers weren’t limitless, she had long kept those powers a secret, only applying them in practical situations, as she knew her powers would be in extremely high demand.

Eventually, she was detected by Alpha Woman’s telepathy as a meta-human and a request of transfer was filed to send her to the Metrobay Police Department and the Superheroine Squad as their resident doctor and expert in meta-human medicine and therapy. While a staunchly avowed pacifist, Kuria nonetheless does all she can on the sidelines to keep the heroines in peak physical shape and to nurse them back to health after every battle.

Free to use her gifts openly in the company of her fellow meta-humans, she now frequently partners with Ted Twiss to help devise and develop new ways to heal both normal and super individuals from the various attacks on Metrobay, making her one of the most appreciated and important members of the team, even as she’s content to leave the spotlight and theatrical heroics to the rest of the girls.