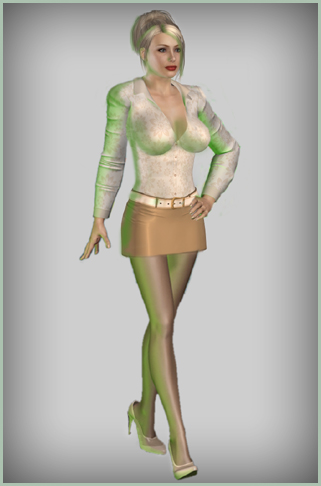 Nene Lee Heaters is an employee at the Sunny Side Resort, the previous secretary and personal assistant of its owner before he fled the country for tax fraud. It appeared Nene would join the hundreds of other Resort workers on the unemployment line until wealthy inventor Bea Flowers swooped in to purchase the estate and save their jobs.

Nene then continued her previous job and responsibilities, this time answering directly to Bea herself and running the resort while Bea spent a great deal of her time inventing, managing her businesses, and fighting crime as the heroine Honeydoll.

Things have changed recently, however. Unbeknown to Bea, the villainous Ring Mistress has taken up residence beneath the resort, creating a new secret lab to conduct her experiments and manage her illegal operations. Ring Mistress attacked and enslaved Bea, infecting her with nanomachines and turning her into a human robot to serve her purposes. Nene expressed confusion at the odd behavior her boss showed, but did not press the matter.

However, upon her next appearance, Nene was shown marching right into Ring Mistress’s lair, addressing her as her mistress and begging for the chance to serve and obey. It is speculated that she too fell under Ring Mistress’s brainwashing experiments, or their exists the possibility that she was working with Ring Mistress from the very beginning. Either way, she seems wholly devoted towards serving her mistress and helping to enslave the other heroines that have come to visit the resort.

Nene recently was tasked with helping enslaving the remaining heroines at the resort, but also helped Ring Mistress’s lover Clarissa test out the newly robotized Goldwing. After Nene had managed to abduct and robotize Alpha Woman, Solaria, Snowflake and RollerGrrl as well, she held a private internet auction for interested R.O.P.E. bidders.

With the auction concluded, Nene loaded the five nano dolls into a waiting van and set off to deliver the dolls to the winning bidders. However, during a brief stop, Snowflake reverted to her human form and defeated Nene in a frenzied street battle. At the conclusion of the altercation, during which Nene showed powers unseen previously, it was revealed that Nene was, in fact, a robot presumably constructed by Ring Mistress. Whether this was the true nature of Nene from the very beginning or the robot is a duplicate of the real Nene remains to be seen….