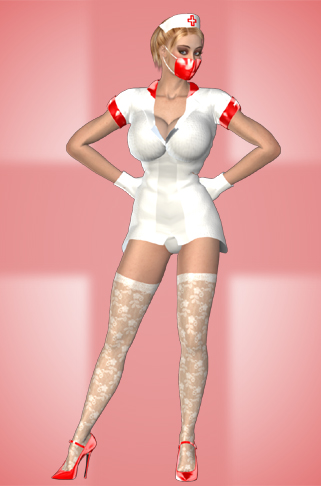 Nurse Perverse was an unusual child. Whereas other little girls her age played with and enjoyed their dolls, little Jody was performing cosmetic surgery on them to make them sexier and more physically attractive. She grew insatiable with the desire to make them perfect and she was never satisfied with the results.

Years later, Jody’s infatuation with beauty and perfection remained, but dolls no longer suited her. Instead, she turned to the outside world and the women around her. She saw ugliness and purity as unnatural “diseases” that needed to be cured and thus began a crusade to “save” these women and make the world a better, more beautiful place.

Jody got her start as the assistant nurse to a prominent plastic surgeon at Malroth’s Memorial Hospital. For years, she assisted in making people beautiful, but her desires to improve upon perfection arose again. She was fired when fellow nurse Sabrina Saxton caught her making unauthorized alterations to many patients while the doctors weren’t looking and her medical license was quickly revoked.

Undeterred, Jody found quick employment as an underground surgeon, willing and eager to help poor, ugly people become beautiful for half the cost of her competitors. Her illegal activities caught the eye of The Diddler, whose own deformity earned him Jody’s sympathies.

Under his employ, she began to assist in “improving” the women and heroines he captured, turning them into idealized sex symbols and “freeing” them from the confines of their morality and purity. Her most prominent piece of work was the respected inventor and heroine, Honeydoll, whom she turned into a walking, overly stimulated sex doll, with the promise of others soon to follow. With an outlet for her passion, and an able supply of pure and misguided heroines ready to be cured by her twisted medicine, Jody completed her transition into the villainous Nurse Perverse, and she couldn’t possibly be happier.

Notable Appearance: Musk of the Mynx