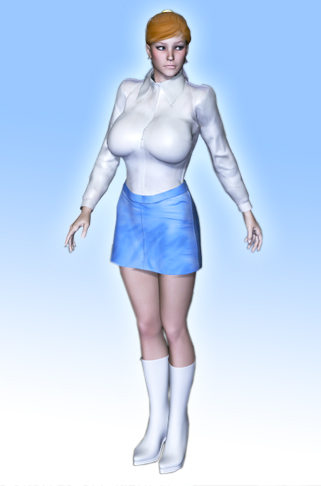 Penny Nichol is a Metrobay University graduate student. Strapped for cash, she consulted her career services representative, Ginger Monroe, about finding a job.

Drawing from her past experiences as a waitress, Penny was directed to the restaurant “Headlights”, and met with its owner, Victor Francis Reno, where she took offense at his lewd interviewing procedure. Seeking a compromise, Vic recommended his subordinate, Carla, carry out the interview process to see if Penny met their high standards.

During the “interview”, Penny was enraptured by Carla’s strange behavior and odd pantyhose, which were secretly laced with thrallium. She was seduced into donning a greentooth earpiece and then enslaved by Vic, who promptly put her to work in the restaurant as the new hostess.

Penny was then instrumental in enslaving the heroine Brown Sugar, who was sent by the Superheroine Squad to investigate signs of potential criminal behavior at Ms. Metrobay’s old restaurant. While Brown Sugar was snooping around undercover, Penny managed to distract her long enough for Vic Reno to activate another greentooth earpiece on Brown Sugar’s head, rendering her a mindless slave.