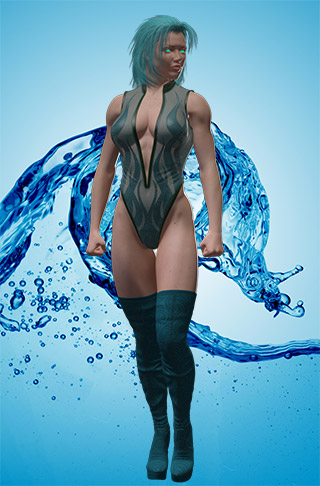 Born one of the legendary Jotun, the frost-giants who were the enemies of the Asgardian Pantheon, Hyrokkin had none of her family’s thirst for battle and conquest, and although one of the best fighters of her generation, had no desire to prove her worth on the field of battle and instead practiced the elemental magic she’d demonstrated a keen mastery of. Annoyed by their daughter’s attitude, when the elvish sorceress Gryla was recruiting for an invasion of Midgard her parents volunteered their daughter for the invasion force against Hyrokkin’s protests. In order to guarantee her loyalty her parents placed her under a geas that would cause her death, no matter where she tried to hide, if it was reported to them that she did not serve Gryla faithfully. 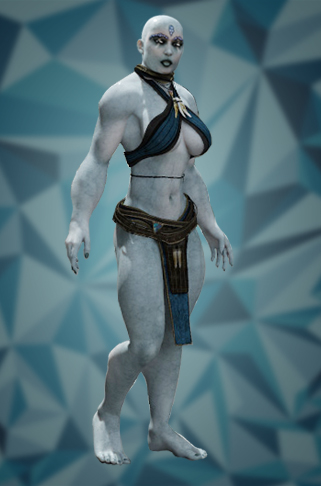 Unfortunately for Gryla, the place she attempted to invade Earth was Metrobay, one of the highest concentrations of superpowered individuals and high-tech science on the planet, and her “invasion”, such as it was, was handily defeated in mere hours. Hyrokkin, who had avoided combat and tried to hide, was discovered by Metrobay Police after Gryla fled and ended up in a standoff, unwilling to hurt anyone but unable to flee. Members of the Superheroine Squad (Solaria, Snowflake, Sword and Shield) were sent to face her, but as she could not speak any human language and they could not speak hers, the situation was at an impasse until Bronk, seeing an opportunity to pad his reputation as a badass, attacked Hyrokkin and quickly found himself on the receiving end of a curb-stomp beating by the annoyed giant.

The squad members intervened (reluctantly) to save Bronk, with Solaria using her control of fire to set up a barrier to keep Hyrokkin back, unwittingly using the element that the Jotun feared as a weapon above the others. Hyrokkin surrendered to Solaria, and in doing so transferred the geas of loyalty to her, having been defeated in battle.

Once Enchantress, who could use her magic to translate, arrived on the scene and explained the situation, Solaria was convinced to allow Hyrokkin to swear loyalty to her so the frost giant did not have to return home to be executed by her family. In order to deal with the impossibility (and impracticality) of trying to hide a giant, Enchantress and Honeydoll came up with cover story of Hyrokkin being Inga Jotundottir, the personal bodyguard of Alexis Wellington, while Enchantress used her magic to transform the giant into a human (albeit a very tall one) along with the language skills she’d need to operate in her new home.

Inga takes her oath to Alexis so seriously she’s created a superheroine identity for herself so that even when Alexis is in costume as Solaria, Inga can still accompany her into battle.

Stormwave possesses superhuman strength, having the physical power she had when she was a Jotun even while in human form, combined with superhuman resilience and regeneration. While her physical powers alone would make her a force to be reckoned with on the battlefield, she also has a Jotun’s mastery over elemental magic, in her case the ability to manipulate water, much as Solaria manipulates fire.

Perhaps her greatest threat to her enemies is that due to centuries of practice and training, Stowmwave is an accomplished warrior, an expert in hand to hand combat and melee weapons such as staves, clubs, and warhammers. When combined with her elemental control over water which allows her not only to attack and defend using water as a weapon but to shape the battlefield itself, she is potentially a one-woman army.

Her power, however, is tempered by the fact that her endurance as a human is significantly lower than she had as a giant and excessive use of her powers will tire her out for a period of time. She also restrains herself from unleashing her full potential as she does not wish to harm others if unnecessary and prefers to avoid battle when possible.