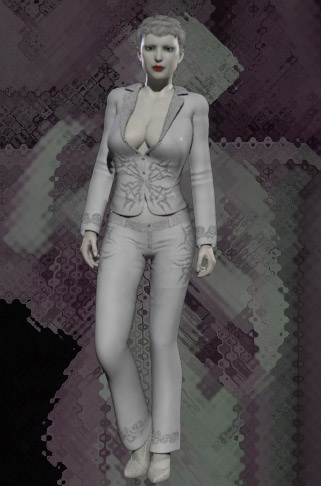 Michaela Angelina Donatella was born with a rare form of albinism and as such stood out from her peers even before it was clear her formidable intellect likewise made her different. Born into a wealthy Italian family, she was nicknamed “the Little Statue” by her family due to her resemblance to the classical marble sculptures that covered the family estate. Donatella quickly became inspired to try her hand at art but discovered she didn’t have the ability to work with stone. Nonetheless she became fascinated by the human form and soon became obsessed with the concept of physical perfection in all its varied forms.

In university she earned multiple degrees in biology and nanotechnology, studying the possibility of using nanotechnology to alter and modify the physical form. She was recruited by APEX Labs and soon became one of the leading researchers in its Black Division, and became one of the major minds responsible for one of APEX’s greatest achievements, the Modification Machine.

Eventually growing disenchanted by what she saw as Max Indeks’s monopolizing what she considered her invention, she left APEX and secretly took with her the technology for the modification machine and continued her work on it while raising funds by assuming the identity of The Sculptor, a supplier of black market body modifications. Totally amoral, she supplies a service for those who want their own bodies altered, whether for personal reasons of ego or to assume a new identity, and those who want other people altered in mind and body–willingly or not.

Due to the manner in which she “acquired” her technology, she avoids operating in Metrobay so as not to cross paths with Indeks and generally makes a point to keep a low profile, relying on a reputation for professionalism and discretion for her very select clientele.