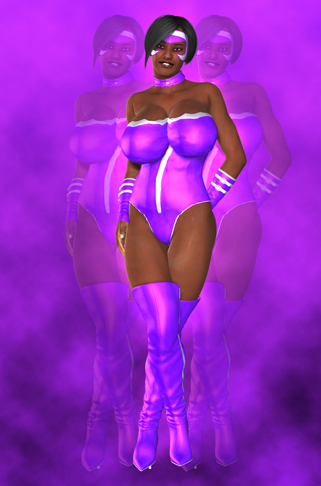 The young woman who goes by the moniker of “Trace” is a fairly new recruit to the Grrl Power squadron.

As a child, Rhonda was close to her older sister Kendra and idolized her growing up. Kendra was driven by a strong sense of justice and dreamed of joining the Metrobay Police Department to help clean up the city she was so fond of. Rhonda, however, was more focused on looking out for herself and criticized her elder sibling as being too idealistic, viewing Metrobay’s crime problem as beyond their concern.

Rhonda discovered her ability to teleport during her adolescence, but hid her powers from friends and family out of fear she’d be discovered and perhaps recruited by the Superheroine Squad. She only wanted to live a normal life, even as her sister was submitting her application to join the Metrobay PD and make a difference. Rhonda used her teleporting powers for her own selfish purposes – to trespass, to steal, or to quickly get out of trouble.

Rhonda’s worldview turned upside-down when she received the call that Kendra had been injured in the line of duty while attempting to stop a bank heist and paralyzed from the waist down. Realizing that her powerless sister had sacrificed so much to protect their city and ashamed at herself for her own selfish behavior, Rhonda revealed her abilities to her sister and approached the Superheroine Squad with the desire to use her powers to protect others from a similar fate.

Rhonda has since thrown herself fully into the world of superheroism and her life has greatly improved since. She’s grown very attached to her new superpowered friends and instructors and has even jumped into a relationship with fellow rookie hero, Rocksteady.

But through all her experiences, newfound success, and superpowered liberation, Rhonda has never lost sight of the one who inspired her to turn her life around. For all her heroism, to Rhonda the greatest hero will always be her sister Kendra.