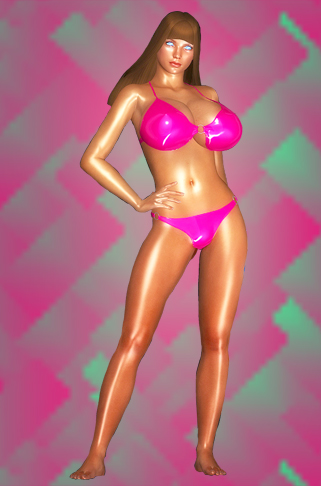 The third android doll creation of Gilbert Petto, Trophy was in truth the result of original doll, LISA, realizing that her former master Gilbert needed a more suitable companion to assist him and alleviate much of the loneliness and desire for human companionship he had been lacking.

Acting of her own accord, in what she felt was Gilbert’s best interest, LISA determined that her creator’s “ideal woman” was a composite of four women he valued in his life. LISA then went about acquiring them to contribute their assets to his ultimate doll.

Trophy’s physique was largely gleaned from Liz Trance, the ex-wife of his fellow professor Lorenzo Trance. Her intelligence and toned legs were copied from his former protege Raquel Summers. Her athleticism and loyalty were extracted from his heroine idol, Omega Woman. All three were enslaved by Lisa’s hypnotic powers and brought to the lab to contribute their own unique assets.

But most importantly, LISA formed her face, voice, and personality from that of Gilbert’s late wife, his beloved Lillian Elise Petto. This composite doll emerged more self-realized and advanced than any doll before her and LISA eagerly presented the christened “TORI” to her new master.

Gilbert admittedly was unsettled by the uncanny resemblance the doll had to his departed wife, but TORI’s charming personality and eagerness to earn his affections eventually won him over and she now stands by his side as his dutiful companion and loyal assistant.

However, Gilbert’s preference for his Trophy doll might have lingering affects on his former favorite doll, the now slightly less favored Saccharin…