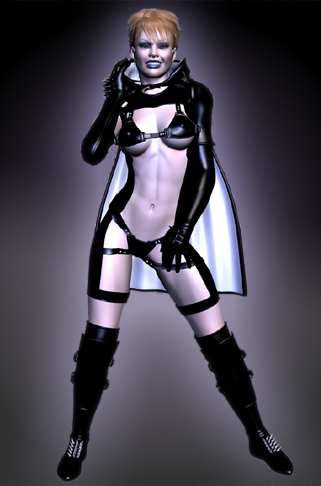 Alice Goodland was a simple Metrobay real estate agent with nothing special going on in her life. She was discontent with a mundane life, a string of failed relationships, and forever yearning to be apart of Metrobay’s elite circle of the rich and famous. But she had resigned herself to her lot in life.

That changed when she was put in charge of selling off an old, abandoned cathedral to what she assumed were European businessmen. The reality was the buyers were the infamously deranged criminals, the Sinister Minister and Noctrissa. They acquired the cathedral and kidnapped Alice as well, placing her under a spell to comply with their orders.

Alice soon discovered they were acting on their own orders from higher up, from the notorious Gothikka. Against her will, she was forced to endure a scandalous black arts ritual and was “married off” to the Sinister Minister, having her mind, body, and soul corrupted by Gothikka’s black magic until she joined them as an evil, deviant accomplice to her influential and powerful new mistress.

She used her recent connections to eliminate her prior boss and assumed control over his real estate agency. She then began luring her once loyal customers into a trap, starting with Alexis Wellington, the heroine Solaria.