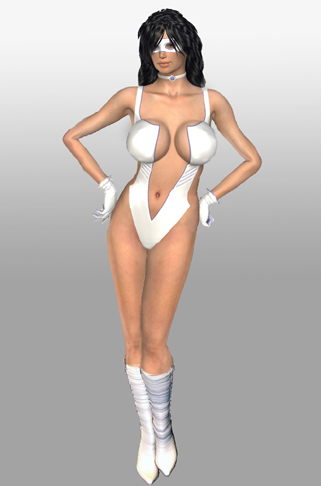 Valient Grrl is one of the first superheroines introduced during the formative years of Metrobay Comix, and is perhaps best known for her role as the first victim of Dr. Twisted during the Twisted Tales storyline.

Kristen Thomas spent her youth trying to downplay or outright hide her powers, fearing that her superhuman strength would one day harm someone close to her. After enrolling at Metrobay University she met members of the Grrl Power junior heroine team, who helped her realize she shouldn’t be afraid to use her gifts for good. Eventually she decided to accept her abilities, and left college to join the Metrobay’s Superheroine Squad full time.

As the youngest and most inexperienced member of the senior team, she was paired with Alpha Woman in the hopes that the veteran heroine and team co-captain could teach her a thing or two. During their time as partners they grew very close, so much so that Valient Grrl eventually fell in love with her very blonde and very busty teammate. However, Alpha Woman initially viewed their relationship as strictly professional.

Valient Grrl holds the distinction of being the first ‘human robot’ introduced in the series during Twisted Tales, and the first victim of Dr. Twisted’s scheme to exact revenge on Alpha Woman. In her eagerness to prove her worth to her superiors, she allowed her inexperience and gullibility to lead her into his trap. She was brainwashed into his obedient robot slave ‘RoboGrrl’ and used to capture Alpha Woman. When given the chance to abandon her for freedom, Valient Grrl selflessly chose to re-submit herself to Dr. Twisted’s control in order to remain with her would-be lover.

Valient Grrl was later captured and reprogrammed by Dr. Twisted’s rival, Belinda Giolla, and used alongside the amnesiac Ms. Metrobay in an experiment that helped create the android Mechana. Valient Grrl was able to break free of her control and escape during this time, and helped lead the charge to rescue her captured teammates. She and Mechana have remained on uneasy terms, though Valient Grrl has grown slightly more comfortable with her similarly-powered teammate as the years have gone by.

After the rescue, Valient Grrl and Alpha Woman finally admitted their feelings for each other and became an official committed couple, and Valient Grrl’s displays of self-sacrifice and untapped leadership skills lead her to rise in the ranks of the Superheroine Squad to become a mentor to younger heroines, much like Alpha Woman was to her. She holds the distinction of being the youngest full-fledged Superheroine Squad member in the squad’s history, a testament to her skills and versatility.

As loyal as Valient Grrl is to her partner Alpha Woman, she has nevertheless had a brief tryst with her robotic counterpart, Mechana, during the events of Tough Love, though this was likely due to outside influence stemming from Alpha Woman’s erratic new power spikes.

Valient Grrl was later captured and converted into a H.E.R. drone during Superheroine Squad, when she and Alpha Woman were unsuccessful in attempting to rescue several enslaved teammates and civilians. She helped assist in capturing and converting Pink Pussycat, as well as attempting to subdue Mechana, with moderate degrees of success. She was eventually released from her enslavement after Sentius was destroyed.

In her civilian life, Valient Grrl is really Kristen Thomas, an unassuming secretary at Metrobay Police Headquarters. She was assigned this position when she first joined the Squad as part of the requirement that all junior heroines hold down some sort of part-time job or internship to keep them grounded in the day-to-day life that most civilians face. She has been shown to have access to a wide variety of information on both heroines and villains alike, which made her a valuable asset to Dr. Twisted during her time under his control. 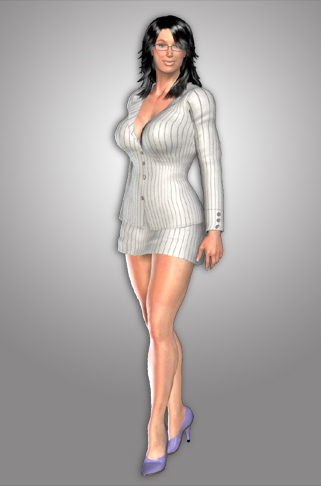 Valient Grrl encountered the new “heroine” Hypnotica while in her civilian identity at the police station. Hypnotica has inferred that she and Officer Mick Jones have a flirtatious, if innocent, relationship that nevertheless made her feel jealous. Hypnotica was sent to break the villain Troublina out of prison and knowing that Kristen wouldn’t just allow that, proceeded to use her hypnotic powers against her and enslaved her. Kristen then assisted Hypnotica in freeing Troublina from prison and awakened without any memory of the incident, though she then was able to track Hypnotica down to find some answers. Unfortunately, during the confrontation she accidentally exposed Hypnotica’s breasts and Valient Grrl was hypnotized once more. She was saved by the timely passing by of Snowflake and Troublina, the latter of which bartered for her and Hypnotica’s freedom in exchange for leading them to the source of all the trouble.

Upon sneaking in to APEX’s fortified complex, the group discovered an illegal cloning facility and dug up information revealing Hypnotica to be a clone of college student Patricia Summers. While quick to condemn her as a scientific abomination, Snowflake revealed the startling news that the computers listed Valient Grrl herself as a clone.

Valient Grrl’s origin was then recently revealed by Max Indeks. In truth, Valient Grrl was a genetic experiment by R.O.P.E. to create the perfect superhuman. Her genes were directly taken from her predecessor, the heroine Valiant Woman, who also served as the surrogate mother that gave birth to her, though neither was initially aware of this. Valient Grrl was implanted with false memories that were designed to condition her to complete obedience, but a researcher altered the programming, which caused a confused Valient Grrl to flee the lab she was created at. She assumed the identity of “Kristen Thomas” and was discovered by Alpha Woman while on patrol and taken in by the Superheroine Squad, giving her a home, purpose, and family to defend and fight for.

Valient Grrl awoke alone with Hypnotica, and later offered her a home and protection within the Squad, taking Hypnotica on as her junior partner. This also began to generate strong feelings in Hypnotica towards her busty, brunette partner. While Valient Grrl has stayed true to Alpha Woman, following the events of “Body Image” she did willingly return Hypnotica’s affections, if only to placate her partner’s concerns that her feelings would jeopardize their partnership.

Soon after, Alpha Woman and Valient Grrl traveled to the parallel universe of Platinum Earth to locate their missing friends. The pair was ambushed by the villains Skullcrusher and Piranha, the former of whom was strong enough to immobilize Valient Grrl herself. Both were outfitted with control chips and forced to serve under their leader, Master Ultimo, until the combined efforts of the Superheroine Squad and Platinum Earth heroines liberated them from his control. Valient Grrl and Alpha Woman then returned to Metrobay alongside their teammates. 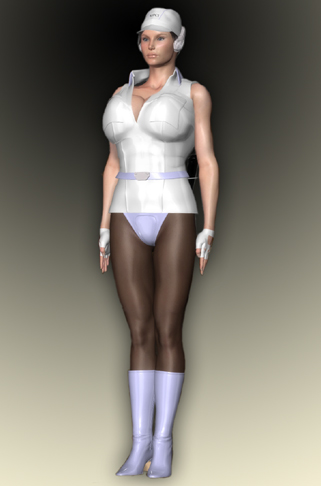 Valient Grrl later was a victim of Blackout’s mischievous antics while in the body of MilkMaid. Both she and Alpha Woman were hypnotized by MilkMaid’s thrallium-based breasts and forced to drink from her, with Kristen mistaking the robot duplicate for Ms. Metrobay the entire time. Both heroines awoke with no memory of the incident, but residual effects of that encounter left a surprised Kristen with swollen breasts of her own.

Blackout caused further mischief when she accompanied Valient Grrl to the Funhouse to deliver the prostitute Trixi into Warden Smith’s hands. While there, Crissy found Belinda running freely through the prison, but rather than turning her in, she struck a deal with the villainess in exchange for transformation into a human robot. Luring Valient Grrl into a trap, Crissy betrayed her friend and teammate and used her Blackout abilities to rob Valient Grrl of her super strength. Kristen was then strapped into Belinda’s Psycho-slaver device and was forcefully brainwashed, leaving her an obedient shell for Belinda to control. She was then inducted into Belinda’s small army of sexy prison guard slaves.

At some point, after a costly and destructive battle with supervillain Aria in which she was ridiculed by the Daily Metro, Valient Grrl accepted an offer to be a centerfold model for “Metro Men’s Magazine” in the hopes the publicity would help improve her image among the general public and bolster her own self-esteem. However, the offer proved to be an elaborate trap designed to lure her in and she was hypnotized into obedience while posing for the camera. A slave to the whims of Leo, Cleo, and Theo, she was forced to destroy the studio of a rival photographer and fashion designer and assist in his kidnapping. She later was confronted by Hypnotica back at headquarters and attempted to seduce her. She successfully kidnapped Hypnotica, then battled, defeated, and captured Alpha Woman in the process, all to serve her Mistress’s will. The story is on-going. 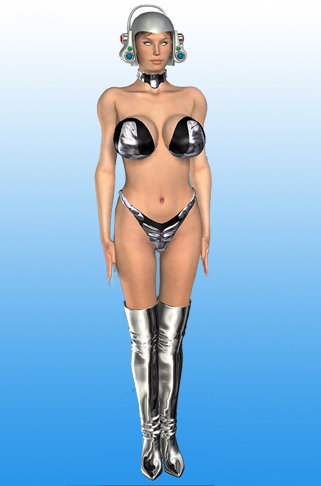 Valient Grrl continues to be the powerhouse of the Superheroine Squad, with the strength, courage, and resolve necessary to take action when the need arises. Though she is prone to emotional outbursts and brash action, her greatest weakness may in fact be her own temper and impatience with others. With the help of her more experienced teammates she is slowly learning to mature in that regard.

Valient Grrl is the latest in a line of heroines to utilize the “Valiant” name, following the original Valiant Woman and her successor, Valiant Girl. She was forced to alter the spelling of her moniker when Max Indeks falsely claimed copyright ownership of the title, winning a sham of a trial in front of a bribed jury. Max had intended to create his own superpowered “Valiant Girl” as a mindlessly obedient clone of the original, a scheme that was eventually thwarted by the Superheroine Squad, though no parties involved were aware that Kristen was the clone in question.

As an aside, it has been shown that Valient Grrl is also a fan of expensive cars, which is right in line with her flashy and brassy attitude. In fact she once loaned her sports car to the novice driver Omega Woman when the veteran heroine needed a ride to ROPE Mansion to take in one of Mesmerella’s exclusive magic shows.

Valient Grrl is without question one of the strongest women in Metrobay, a bragging right many will dispute and few will successfully defend. She has been observed tearing through solid brick and steel walls with her bare hands, and she has been shown lifting half-ton weights for repeated intervals, a feat of strength that far outclasses the likes of villains such as Bronk, who himself has the strength of “a dozen men”. One major rival for the title is Mechana, who possesses a replica of Valient Grrl’s powers. While they were equal in strength at the time of Mechana’s creation, Valient Grrl has since trained vigorously to become stronger, a luxury the android does not have. In a feud with her android double, the two appeared on equal footing, with Valient Grrl gaining a slight advantage before the brawl morphed into a love-making session. Mechana herself was able to hold her own against the likes of the super strong Super Freak, implying that Valient Grrl herself would have been able to handle the massive supervillain. It was shown that even when depowered, Valient Grrl’s strength remained above average and she was able to subdue others possessing enhanced strength.

Despite her strength, she has still been shown to be surprisingly susceptible to injury. Her skin was able to be punctured by a needle when Dr. Twisted ambushed her, and she had cybernetic implants drilled into her head when she was converted into a H.E.R. drone by Sentius, though it is possible both incidents involved highly specialized, razor-thin technology that would not otherwise have harmed her.

Interestingly enough, Kristen’s strength and powers are noticeably similar to her direct predecessors, the original Valiant Woman and Valiant Girl, though they possessed additional powers she appears to lack. The result of Valient Grrl’s genes being based off of Valiant Woman’s is the likely cause for the similarities.