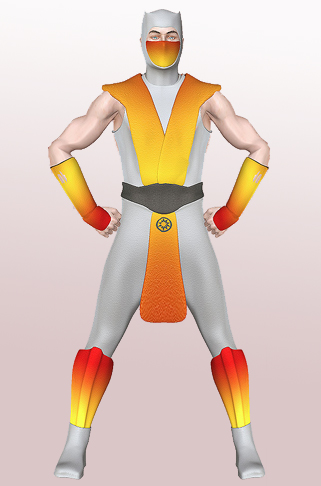 Vermin is a skilled and manipulative assassin who left his secretive and noble order in Japan to seek personal wealth and glory after learning their most sacred of stealth and combat techniques.

Vermin quickly carved a small criminal empire for himself in the Dragon Cove, the “Chinatown” of Metrobay. He established a hideout in the darkest shadows of Grime City, recruiting disgruntled youths and skilled criminal underlings to build his empire. Thus, the Vermin Clan was born.

Vermin quickly developed a reputation as a sadistic and ruthless leader, eagerly torturing captives and forcing new members to undergo extreme measures to prove their loyalty to his cause.

However, Harama’s reign of terror was short lived. Max Indeks and the Circle of R.O.P.E. set in motion plans to eliminate this growing competition, eventually ousting Vermin from the ranks of his own organization. Indeks himself took Harama’s place under the hood, manipulating the clan toward carrying out R.O.P.E.’s schemes instead of their own.

After his arrest by Samantha Sable and members of the Superheroine Squad, Vermin found himself behind bars at The Funhouse. The remaining members of the Vermin Clan drifted aimlessly without their leader’s daily direction.

Harama’s skills in the martial arts are well known. He is skilled in several dangerous and even fatal styles of combat and is a master of several forms of armed and unarmed combat.