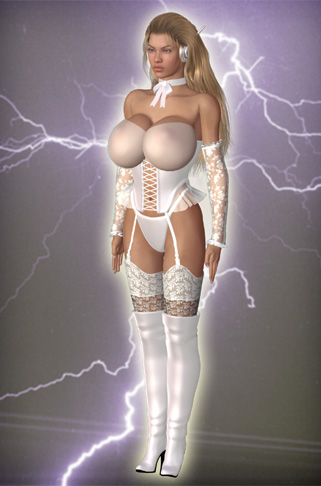 Metrobay is populated by beautiful women, yet Voltara stands out above the rest for one good reason: she was made that way.

Perhaps ‘made’ isn’t exactly the right word to use to describe Voltara’s debut, for little is known about where this heavenly beauty came from or who she was before that fateful Halloween night in the dungeon laboratory of ROPE Mansion. What we do know that an unholy combination of sinister sorcery and super science brought Voltara as we know her to life, and since then she has served Gothikka as a loyal servant, eager concubine, and obedient bride.

Voltara’s stunning good looks and jaw-dropping physique can be attributed to the three Zom-Babes used to supply her with their very essence: Omega Woman, Ms. Metrobay, and Brown Sugar. Each superheroine was chosen by Gothikka for her impeccable physical attributes, and employed by Frank Einstein as a means to breathe life into Voltara’s perfect body.

Voltara has also been fitted with one of Feelix Von Ick’s old Mindbender headsets and infused with Gothikka’s mind controlling venom, all but ensuring her complete obedience for the foreseeable future. She was last seen resting peacefully in a mausoleum on the grounds of the mansion, awaiting the day when her goddess bids her to rise and serve once again.