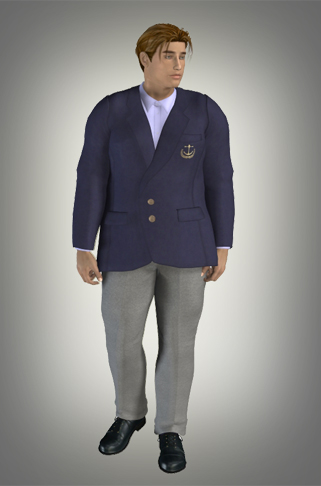 Wesley Mitchell is the newest and youngest member of the famed Circle of R.O.P.E. He is the only son of a very influential and wealthy family and spent his entire childhood in the lap of luxury.

Wesley grew up heavily sheltered. He was given the best home-schooled education that money could buy, but as he matured he held on to childish inclinations and was frightened and intimidated by the outside world. Anything his heart desired could be bought with money if he asked, begged, or threw a tantrum over.

When he finally became an adult and flew the nest to go to Metrobay University, he was overloaded by insecurities and disadvantages his sheltered life had not prepared him to deal with or manage. He was socially stunted and emotionally immature, and his first experiences amongst other students was not pleasant.

Mistreated, bullied, and picked on for his perceived deficiencies and his short, heavy-set build, Wesley sought kinship elsewhere and found it amongst the twisted and deviant fiends of the Circle of R.O.P.E. Though a bit childish, Max Indeks himself expressed a vested interest in seeing him become a worthy member of R.O.P.E. and began to use his influence to make things considerably better for young Wesley.

Due to his poor social skills and unflattering physique, Wesley had trouble meeting women or findings dates. An arranged blind-dated with fellow socialite Pristina Wellington almost proved disastrous enough to give up dating entirely. Following Max’s suggestions, and with a little help from the nefarious Madame Mynx, Wesley instead decided that if he could not win a girlfriend he would STEAL one.

Setting a trap with himself as the bait, Wesley faked a mugging with the heroic Freedom Girl jumping in to save the day. When the moment arrived, he backstabbed her and relieved her of her power belt, rendering her powerless. He then had R.O.P.E. put her through the Modification Machine, brainwashing her old identity away and implanting complete and utter love and devotion towards him in her. When she awoke, she was uncontrollably lovestruck and very quickly wound up as his submissive, compliant wife. With his new bride tending to his every need and desire, Wesley’s life has significantly improved… all thanks to Max Indeks and his R.O.P.E. connections.