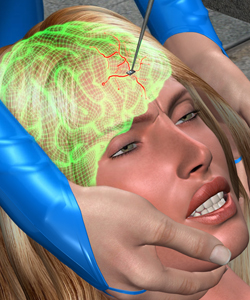 Developed by APEX Labs lead scientist Leela Patel, the “Nano-leash” is a prototype mind control microchip that is typically injected into a test subject’s brain, attaching to and bonding with the subject’s cerebellum. The smart chip then begins to rapidly self-replicate, producing millions of tiny nanomachines that tunnel through the subject’s brain and nervous system until their entire body is bonded to the newly installed neural network. The central chip contains a direct, wireless link using X-band frequencies to APEX’s central computers, allowing them to install and upgrade the subject’s mind like any other piece of software and wirelessly control them as needed. The victim’s thoughts and memories are then stored in APEX’s vast database as raw data.

Beyond turning the host into a veritable living computer, the Nano-leash is capable of altering and strengthening its host’s body in many ways. It can rapidly inject synthetic hormones or estrogen, or self-replicate and expand in isolated areas to increase or augment a host’s erogenous zones or body shape, or release adrenaline to heighten a subject’s strength and reflexes, or bond to tissue and bone to strengthen their durability.

As a result of the treatment, hosts are energized by the millions of nanomachines coursing through their body, supplying them with synthetic and artificial energy. Subjects no longer require food, liquids, or sleep and possess inhuman levels of endurance and stamina.

Other side-effects initially included an inhuman red glow visible in the iris of the eye, one of the few tell-tell signs of a nano-leash victim. Max Indeks and Leela have updated the software to colorshift this glow to more natural eye color hues with less obvious iridescence, or if the software hasn’t been updated, masking the robotic eyes with contact lenses or shaded glasses in public.

Despite being arguably the most effective and versatile enslavement method at their disposal, the nano-leash has proven to be exorbitantly expensive and barely cost-effective. The use of micro-scale machinery and highly concentrated doses of thrallium woven into the circuitry has assured that potential victims must be carefully chosen and selected, limiting its wide-spread use.

Leela Patel has recently upgraded the software and linked it to her prototype control visors for what she has dubbed “Project Suit”, allowing her to manually take over any nano-machine subject’s body and pilot them as if she was actually in their body.

Currently known victims include secretary Nicole Banks, civilians Kate Van Houter and Desdemona Rushman, heroines Azure Avenger, Onyx Thunder, Projekt, and Tempo, and even the villains Cleopatra Sardonis and Aria. Ms. Metrobay is the only known victim to have escaped enslavement after Omega Woman fried every nanomachine in her body, freeing her of its influence.