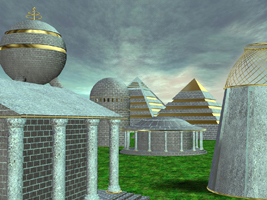 The legendary lost city of Atlantis was a highly advanced and bountiful isolated island that existed some 22,000 years ago, a stark contrast to the neighboring countries which were feral and barbaric.

According to its own myths and legends, Atlantis was created by the elemental wind goddess Avia, the benevolent entity of air, along with the immortal serpent Ophidian, the cunning entity of earth. The elemental of water, an ancient primal creature named Triton, was denied contribution to this pinnacle of human creation, an oversight he swore to rectify.

Atlantis thrived as the most peaceful and advanced city in the world, partially due to its all female queendom and dominance by peace-loving women. However, when the wars of men began to breach over to their sacred shores, the army of Atlantis took action, forcefully conquering their immediate neighbors and reducing the vast majority of brutish warriors to mindless and loyal Atlantean slaves.

The Queen of Atlantis, however, decided to entrust citizenry to gifted and intellectual male captives, a decision heavily protested by Princess Valaya, the heir to the throne and the Crown of Atlantis. One such individual given this privilege was a male captive named Draven.

Draven, however, undermined the queen’s trust, learned the secrets of technomacy, and turned their technology against the empire. Members of the royal house were converted into mindless, obedient slaves the same way they had done so to his previous brothers-in-arms. Draven even enslaved the Queen herself.

Draven then ordered the Queen to allow him the honor of becoming the mortal host for their patron deity Ophidian, making him in essence immortal and immediate heir to the throne. Valaya was given to him as his wife to consummate his claim to leadership. Valaya instead fled Atlantis, choosing exile over enslavement.

All of this was orchestrated by the angry water elemental. When Atlantis’s splendor eventually toppled under the corruption of Draven, Triton orchestrated the falling of a meteor, which devastated the city and left it permanently submerged underwater, ending its brief and glorious time as an Eden on Earth. It is theorized that the impact of this meteor is what encased Valaya in a crystal cocoon and eventually gave her the power to become the heroine known as Valiant Woman.