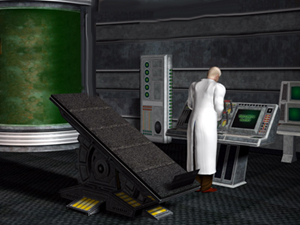 Dr. Twisted’s lair exists inside a dilapidated building within Grime City, not far from the docks of Metrobay Harbor. The laboratory is a marvel of high science, which is especially impressive since the doctor has obtained most of the equipment through illegal means. Much of the technology for his computers and even the lab table itself were stolen from APEX labs under cover of night. Max Indeks is pretty confident that he knows who did it, but was reluctant to share this hunch with police for fear that APEX should come under greater scrutiny than it already was. Many illegal and immoral experiments take place within the walls of APEX, experiments that Max and the board would prefer to keep clandestine.

Dr. Twisted tricked the young Valient Grrl into his lair before converting her to a human robot, as he subsequently did to her partner Alpha Woman and the heroine Brown Sugar. His lab was apparently so well hidden not even the supercomputer Sentius was able to discover its location.

Dr. Twisted’s lab ultimately exploded in flames and was destroyed after Sentius went rogue during the climax of “Twisted Tales.”