The Damsel Expeditionary Service of Investigation, Rescue and Espionage was established in 1885 by Woodrow Strangecraft under the secret authority of Queen Victoria. In those days, haphazard mission records were kept by Strangecraft himself, often in illegible journals. At some point, Strangecraft’s sanity came into question and his handwritten accounts are thought to be mostly unreliable. This has led some to consider the involvement of Queen Victoria to be a myth.

In its formative years, the agency was comprised of only a handful of eccentric operatives. Throughout its history, the agency has the distinguishing quality of employing female agents almost exclusively. Agents of D.E.S.I.R.E. are known for working under secret codenames, occasionally their first name but often a nickname or made up alias.

Members introduced so far have included:

Agent Scarlet
Agent Scarlet was one of the original Agents of D.E.S.I.R.E. during the late 1800s. She was a member of Buffalo Bill’s Wild West show and was a very close associate of the Agents of D.E.S.I.R.E.’s founder, Professor Strangecraft. She managed to get herself entangled in the affairs of the time traveling Inspector Cross and Draven Ophidian, winding up as Draven’s hostage. Inspector Cross ultimately rescued her before returning to her proper time.

Agent Darling
Agent Darling is an adventurous globe-trotting member of the Agents of D.E.S.I.R.E. She has ventured into the deepest jungles, explored the most boobytrap-laden temples, and climbed the most treacherous mountains. She is an expert survivalist and is usually prepared for any adventure. During one particular investigation, she was ambushed and kidnapped by Kikka Brust when she and Agent Summer discovered the frozen Valiant Woman. Darling was then used as a guinea pig by Feelix Von Ick and turned into arguably the world’s first human robot with the help of an early mindbender headset.

Agent Amber
Agent Amber is a proficient and skilled Agent of D.E.S.I.R.E. and one of the more versatile and talented of its members. She was taught by her mother, the former Agent Scarlet, from whom she shares her mother’s trademark fire-red hair. She has crossed paths with Draven and Feelix Von Ick on many occasions. She specializes in hand to hand combat.

Agent Zanna
Agent Zanna is a senior member of the Agents of D.E.S.I.R.E. She is notable for her stylish braided ponytail. She has the most experience of any of the members and is in charge of strategy, mission assignments, and team organization, and is often brought in to correct missions that have gone astray or to rescue jeopardized missions and teammates.

Agent Summer
Agent Summer is a headstrong, naïve, and ego-centric member of the Agents of D.E.S.I.R.E., but she has the skills and talents to back up her big words and pomp. Agent Summer specializes in firearms and weaponry, achieving the highest marksman ranks within the entire organization. She does not handle authority figures very well, however. She, along with Agent Darling, was taken hostage by Kikka Brust when the two discovered the frozen body of Valiant Woman. Was then then turned into a mindless and obedient zombot and forced to do Kikka’s bidding.

Agent Tawny
Agent Tawny is a lithe and sneaky agent, specializing in communications, networking, and data research. She was captured by Feelix Von Ick and a woman resembling her was later seen in his service. This woman was eventually revealed to be an android, and it is unknown if the machine is a duplicate of Agent Tawny or whether she was in fact a robot all along.

Agent Dove
Agent Dove is a senior member of the Agents of D.E.S.I.R.E. and a close friend of Agent Zanna. She is calm, level-headed, and rarely loses her cool. She specializes in interrogation and information acquisition, as well as many other versatile skills including infiltration, seduction, vehicle manipulation, and assassination.

Agent Maven
A British agent sent to investigate Draven Ophidian, Maven ended up as his hostage and was experimented upon. She was rendered a mindless slave and empowered with superhuman abilities. She later was freed of her brainwashing and became the costumed heroine Valiant Girl. 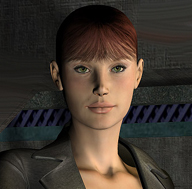 Agent Risque
Agent Risque is a British agent and previous agent of MI-G before transferring to the Agents of D.E.S.I.R.E. She is highly skilled in espionage, spy tactics, and infiltration and is often addressed as a femme fatale for her some of her more seductive techniques of information extraction.