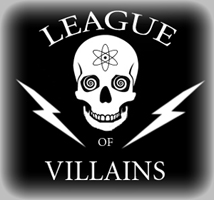 The League of Villains are the self-titled group of superpowered criminals who exist almost solely to cause havoc for the Superheroine Squad and the good citizens of Metrobay.

In reality, the League of Villains is an elaborate distraction concocted by the Circle of R.O.P.E. to keep the meddlesome Superheroine Squad occupied with other affairs while they tend to the matter of controlling Metrobay through bribery, intimidation, and outright criminal enterprise. The League also serves as an outlet for several evildoers such as Syman Sayz, Trixtress, Madame Mynx, and Chef Pasty to live out their perverted sexual fantasies under the guise of flamboyantly costumed criminals.

The League is well funded, with many of its members multi-millionaires and successful business owners in their own right. The League has acquired a number of secret hideouts, weapons, and other paraphanelia through its affiliation with R.O.P.E. and its chairman, Max Indeks. Max’s corporation, APEX Industries, is known throughout Metrobay’s criminal underworld for its depraved technological advances in bondage, mind control, and other illegal activities. The League certainly gets its fair share of that technology to use in its naughty schemes, in exchange for kickbacks to Indeks and serving as his own loyal henchmen from time to time.