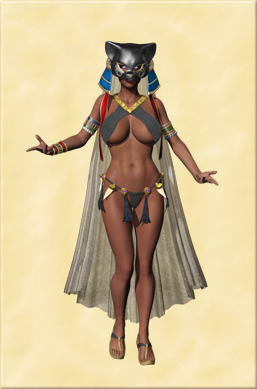 Bast is the Egyptian goddess of protection, cats and perfumes.

In Metrobay lore, in ancient Egypt, Bast was smitten with the pharaoh Zandash. The consequences of their relationship trace down through time and affect modern Metrobay characters in the Myrrh of the Mynx series.

In the forgotten world of Atlantis, Bast was called Ailuros. People prayed for her to protect them from evil. In Asian cultures she is called Li Shou and is highly revered.

Most frequently Bast appears as a human female with either the head of a cat or wearing a cat mask. She can control and summon all felines, and through the ages she has been known to bestow some mortals with cat jewelry that gifts them with supernatural cat-like strength and agility. These ‘servants of Bast’ must obey her will and often are employed as protectors against minions of evil. Bast can also create potent perfumes.

Bast’s primary enemy is Keket; the Egyptian goddess of shadows and serpents.