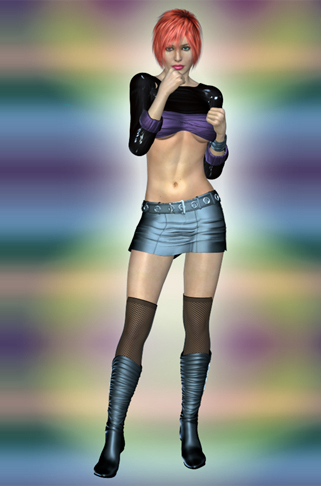 Alyssa was born into the elite of Metrobay society: a wealthy heiress who was denied nothing and had every advantage handed to her on a platter. She grew up spoiled rotten, and soon attained a reputation as a part girl. Despite that, she often expressed awareness of her responsibilities, as a member of the elite, and showed signs of being more than just another little rich girl.

Those tendencies were diminished when she fell in with the notorious Pristina Indeks at Metrobay University. Her studies slipped and she became a staple at all the parties on Sorority Row.

The party ended one fateful day at the labs of Pristina’s uncle, where the girls unwisely experimented with a set of “Drone Control Glasses.” Their arrogant attempts to use two of the lab’s Graybots as playthings backfired, leaving Alyssa converted into a Graybot herself. She is currently still a member of the Graybots’ lovely legions…. presumably under control of her former bestie, Pristina.