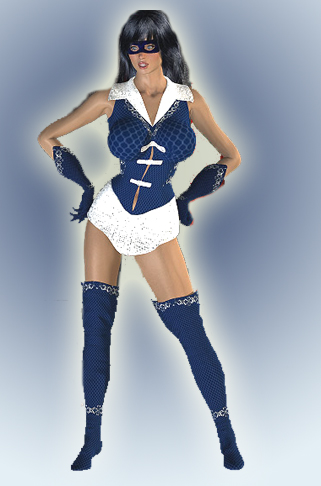 Heather Reins is the newest Assistant District Attorney in Metrobay. She’s a talented and thorough investigator and one of the more noble and ambitious individuals in Metrobay, cracking down on the criminal organizations associated with R.O.P.E.

Heather is also secretly the superheroine codenamed Bluebird, a crimefighter of the highest order. She has been on the job for many years and has crossed paths with her share of deviant supervillains. She utilizes a suit laced with advanced nanotechnology, endowing her with enhanced physical powers and allowing her to fight crime on the streets of Grime City as one of Metrobay’s fiercest protectors.

Bluebird is the senior partner of Swallow, whom she routinely treats as an inexperienced rookie. Her attempts at exerting a motherly influence over her junior partner have often backfired, leaving Swallow with several misgivings about their off-balance partnership.

Despite her noble nature, Bluebird inadvertently rubs many the wrong way, often treating younger heroines as amateurs and demeaning those she feels are not up to her skill level. This has gotten her into a bind on more than a few occasions, and her would-be saviors have often had second thoughts about lending her a helping hand.

An encounter with the villainous Clownetta resulted in her fragile partnership with Swallow being damaged when she refused to credit the younger heroine’s work, got herself captured, and she was left tied up with Clownetta by Swallow until the Metrobay Police arrived to clean up the embarrassing ordeal.

Recently, she and Swallow were duped into being framed for a kidnapping staged by Max Indeks and the Boyz, with some notable assistance from Sergeant Erica Donovan and Ginger Monroe. They were hauled away to The Funhouse and put under Belinda’s care for her experiments. Bluebird was chosen as the first test subject and strapped to the psycho-slaver machine and turned from a noble, conservative heroine and heterosexual into Belinda’s own submissive, oversexed lesbian slave, who promptly displayed her obedience by sexually stimulating her own captive partner without complaint or hesitation. 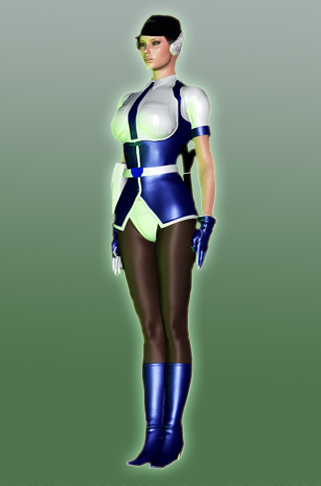 In further displays of complete loyalty to Belinda, Heather was put in charge of guarding the captive Swallow and then assisted in strapping her into the psycho-slaver, resulting in both crimefighting partners pledging loyalty to Madam Belinda. They were then outfitted with new uniforms and serve alongside Belinda as her own private bodyguards and pleasure slave.

Bluebird’s highly advanced combat suit may not appear intimidating to the untrained eye, yet it enables her to fight crime on par with the best of the best that Metrobay has to offer. The nanotechnology lacing her uniform works together towards specific functions, such as enabling her to sprint at enhanced speeds, bestowing superstrength, or enabling superhuman reflexes and reactions far beyond those of normal human beings. Unsurprisingly, it shares many similarities with Pink Pussycat’s enhanced uniform, both of which were designed by the same inventor.