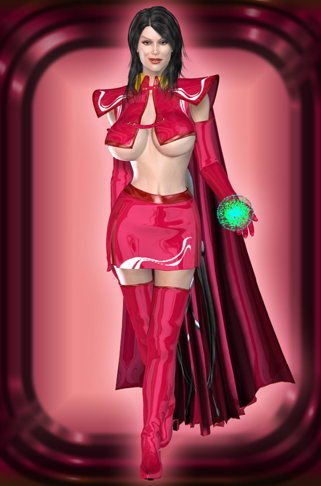 Ylarra Sulliman may be one of the most driven women in Metrobay. She knows exactly what she wants, which is nothing short of ruling the city as its dominating Mistress.

Ylarra was once a petty thief, raiding museums and art galleries for easy wealth and riches. However she got more than she bargained for when she stole an expensive scepter from the Metrobay Museum. It turns out the supposed royal scepter from a fabled lost culture was in fact a powerful magic wand, and quickly became Ylarra’s ticket to bigger and better things.

Ylarra quickly made a name for herself as the villainous “Enchantress”, using her new powers to commit all manner of crimes she was previously incapable of masterminding. She became the arch-nemesis of Nightengale for a long while, and had several clashes with Pink Pussycat and the Superheroine Squad, always having defeat snatched from the jaws of victory.

Driven to her core, Ylarra was willing to use everything she had, including her feminine physique, and was willing to sacrifice anything and anyone in her way to rise to the top of Metrobay’s criminal ladder. She longed to join the Circle of R.O.P.E. and set in motion plans to seduce Max Indeks into accepting her inside that exclusive inner circle. After sampling a bit of what Enchantress had to offer, Max was almost ready to grant her request. However, The Boyz, whom she had mystically enchanted to serve her, were instead unleashed upon her by Nightengale after the dark heroine managed to get a hold of Enchantress’ magic wand and Max was left unimpressed at her inability to control her own men. After this plot disastrously backfired, she was “punished” by Max’s attack dog Lady Payback and incarcerated at Metrobay Prison.

In a strange turn of fortune, Max Indeks, apparently still enamored with her and eager to get her back on the streets, uncharacteristically arranged for her release on parole on the condition that she join a villain rehabilitation program under the watchful eye of the Superheroine Squad. She was partnered with Grrl Power member Spellweaver, a rather inexperienced but competent sorceress with powers similar to her own. Enchantress, however, had no intention of reforming and had nothing but disdain for her new “partner”, though she managed to play the part of the do-gooder heroine in an attempt to get her criminal competition out of the picture, fully planning on picking up where she left off.

However, things have not gone smoothly for her since then. She has quickly realized just how corrupt and ruthless her criminal associates can be when they perceive her to be on the “other” side. Frequently forced to rely on her new companions, Enchantress has begrudgingly developed a mutual respect and even admiration for her partner Spellweaver and the two are often sent on assignments together, becoming arguably her only true friend.

Enchantress’s disposition has mellowed much since then, and she has even been recognized as a full-fledged member of the Superheroine Squad. Despite this, her unsavory past and personality still rub many in the squad the wrong way, and she has developed a rather heated working relationship with Squad leaders Alpha Woman and Ms. Metrobay. Her tactics and motivations have also been subject to much questioning and ultimately lead the team leaders to demand she seek professional help or face expulsion from the squad.

Enchantress served Mesmerella as a submissive, mindless slave until Mesmerella used her and Spellweaver as part of a disappearing act, successfully making the two vanish. 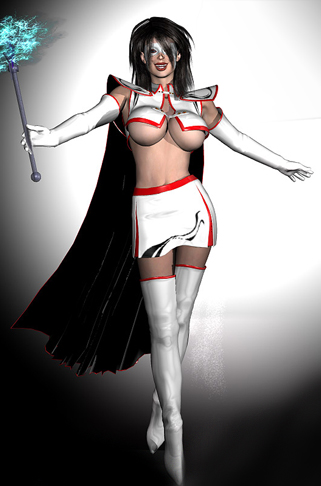 But she was unable to retrieve the two assistants, who had randomly teleported to different parts of the city. While Spellweaver unfortunately wound up in the hands of ex-criminal Lorenzo Trance, Enchantress was fortunate enough to appear beside heroine Goldwing, who took Enchantress back to headquarters to deprogram her. Using the new Reverse Neuro-Stabilizer, they were successful in bringing Ylarra out of her trance, but the bitter heroine, upset at their lack of effort in trying to find and free her, stormed out in disgust, claiming to be through with hero work.

Goldwing, however, ran after the bitter Enchantress and claimed to have a lead on the whereabouts of her partner, Spellweaver. Though she feigned disinterest, Enchantress agreed to help out, ultimately tracking down Lorenzo Trance, who had gone mad with power. As Goldwing and Enchantress plotted a rescue attempt, Enchantress apparently betrays Goldwing, casting a spell on her and then offering to join Lorenzo’s operation, trading Goldwing for Spellweaver. Lorenzo refuses and instead has Spellweaver cast a spell on Enchantress, putting her under his control.

While Lorenzo examines the spellbound Enchantress, he is restrained by a liberated Goldwing, who reveals that she and Enchantress planned the entire ruse to distract him so she could get the upper hand. Lorenzo was forced to make his slaves break the spell, freeing their minds and restoring their free will. For her part, Enchantress was granted a tenuous second chance with the Squad and rejoined, along with Spellweaver, as crime-fighting partners. Though officially reformed, she still did not hesitate to cause some mischief around the headquarters by magically relieving Valient Grrl and Alpha Woman of theiruniforms.

Contrary to popular belief, Enchantress is not helpless without her magic wand, for the years of wielding it have transferred considerable natural magical energy into her body. However, her abilities are at their peak when she uses the wand in conjunction with incantations or other verbal spells. After a humbling run-in with Metrobay University’s villainous Dean Huckleby, she now endeavors to keep her wand safely out of the hands of evildoers, opting to instead use her own slightly less potent powers and spells unless an emergency arises. Enchantress has also used the wand’s power to augment her sex appeal, though her body tends to revert to its more modest shape after considerable time away from the wand’s influence.

Since Enchantress’s powers are magical in nature, the exact extent of their potency is unknown and may in fact be limited to the skill and imagination of the user. Thus far, Enchantress has displayed the abilities to control others’ minds, to modify and augment human bodies, and to create items and objects at will. Given time, mentoring, and experience, it is highly possible she could become a vastly more powerful sorceress.