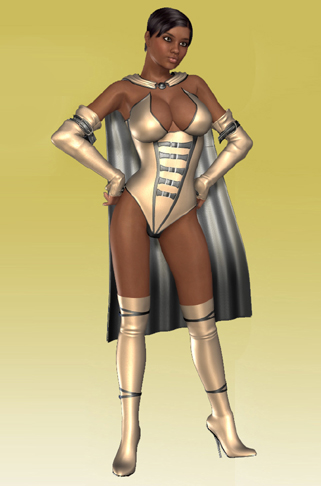 Zuri Hall (“Danielle” to her American friends) was born in a politically unstable and war-torn African country. Her family was both revered and ostracized for their supposed abilities to perform miracles, cast curses, and turn people into newts (though they always got better). Uncertain if they were miracle workers, witches, or dabblers in the black arts, Danielle’s family was always on the move or run, trying to carve out a simple and peaceful existence in a world that was confused and frightened by their unexplainable gifts.

Eventually, they grew tired of their migrant lifestyle and traveled across the seas to the budding city of Metrobay while Danielle was still a child. The Hall family settled in a rather poor section of Grime City, though despite the criminal activity and perversion that ran rampant in their neighborhood, it was still a sizable step up from the famine and disease-plagued lands they left. Once settled, Danielle was encouraged by her parents to use the anglicized version of her given name in order to better fit in with her new social surroundings.

Due to their troubled past experiences, her parents forbid her to use her abilities in public, for good or ill, lest their new found stability and peace be taken away. Danielle reluctantly complied, going to school and quickly demonstrating herself as a star student in her classes.

Years later, Danielle had grown into a lovely young woman and brilliant scholar, earning a full ride to Metrobay University on a highly competitive scholarship. However, despite her best attempts to hide her inherent abilities, she was found out by her classmates Kyla and Alexis when she used her abilities to help stop an otherwise disastrous chemical fire during one of Professor Summers’s advanced lab sessions.

Rather than alienating their new friend, as Danielle had feared, the two girls instead revealed themselves to be similarly gifted heroines and offered her a position on the newly formed Grrl Power team, which she accepted gladly. Snowflake, despite her own relative inexperience, has taken to showing the newly christened “Spellweaver” the ropes of the superheroine lifestyle. Spellweaver has since proven to be a highly competent superheroine in her own right and she has even been entrusted with guiding the semi-reformed Enchantress, a similarly magic-imbued villainess, to becoming a full-fledged champion of justice, a troublesome task that has proven far more difficult than she or the Superheroine Squad probably ever realized.

While still in college, Spellweaver became best friends with Kari Lai-Goodheart, who later become the heroine Shield, and encouraged her to become a heroine while also using her magic in subtle ways to hook Kari up with Kari’s crush, Megan Plainsmith.Shield also implied that Spellweaver perhaps harbored unrequited feelings towards her roommate, who is implied to be her partner Enchantress. 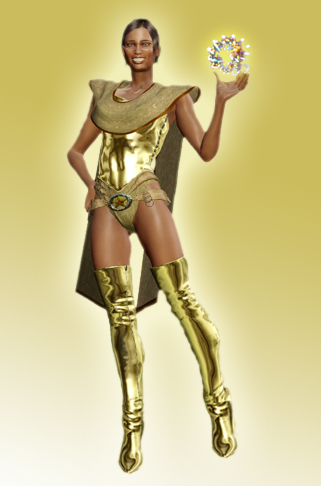 Later, Spellweaver was used along with Enchantress in a disappearing act for Mesmerella’s show. Mesmerella successfully made the two vanish but was unable to make them reappear. The two heroines were teleported to different parts of the city, and while Enchantress had the fortune of being found by heroine Goldwing, Spellweaver was not quite as lucky, being found and captured by the ex-criminalLorenzo Trance. She was hidden from his wife Liz’s prying eyes, but she ultimately discovered his secret and tried to call the Superheroine Squad. In retaliation, Lorenzo had Spellweaver put a spell on her to make her obedient. He also had her enslave her former classmates, Tabitha Essex and Pristina Wellington.

When all hope seemed lost, it was revealed that Goldwing had been freed from her spell and that Enchantress’s betrayal and switch back to villain was all a ruse designed to catch him off guard. With Goldwing threatening him with bodily harm, Spellbinder ordered his slaves to lift the enslavement spells off everyone, restoring them all their their proper minds.

Due to her bravery and heroics, and also due to Zuri’s staunchly defiant testimony on her friend’s behalf, Enchantress rejoined the Superheroine Squad and returned to active duty alongside her partner, Spellweaver.

Because her abilities are supernatural in nature, the exact extent of her abilities is unknown and possibly limited only to her skill, knowledge, and imagination. Because of her inexperience, Spellweaver’s spells are often small in scale and influence, often optical illusions or convenient methods of attack or escape, but given time and mentoring, she could truly tap into her true potential and become a very powerful, very influential sorceress.