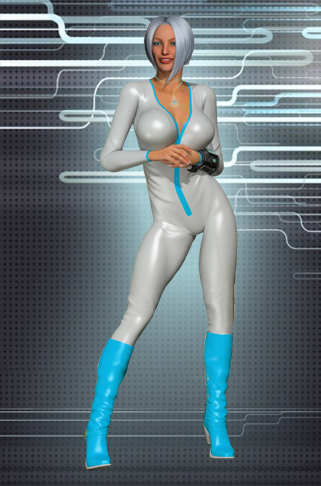 Daphne Frajer is better known by her online moniker “Cyberstar”, a notorious computer hacker and technological genius. One might call her a twisted counterpart to the Superheroine Squad’s own Silver Satin.

She was hired by Lance Hardwood to install and oversee his on-site security at Club Pump. She was also responsible for maintaining the technical aspects of the R.P.N., making sure the cameras and encrypted feeds were all in working order and all Circle of R.O.P.E. viewers got their dollar’s worth of illegal entertainment.

More recently, she was employed by A.C. Quire to help assist him in creating a duplication machine capable of making synthetic duplicates of various civilians and heroines, the first of which was a Graybotted Fran Hill. After “Frandroid’s” creature, Cyberstar and Quire had a falling out and Cyberstar absconded with her newly created fembot. 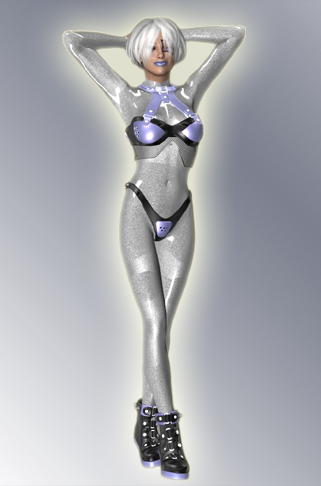 Eager to evolve Frandroid’s primitive programming, Daphne began reprogramming her and keeping her continuously plugged in to her exhaustive network of files and code, increasing the android’s curiosity and making her behave and think more believably human. Since then, the two have become rather inseparable, with Frandroid now serving as Cyberstar’s partner, servant, and lover.

The duo was recently contacted by Vic Reno who required their assistance in creating replacement waitresses for his reopened Headlights restaurant. Frandroid herself led the charge and now oversees the other robotic waitresses personally.

Little is known about Cyberstar’s past – she made sure to hack into any police networks and delete all known personal files – but she has stated herself to be a highly competitive video game player and computer programmer between criminal pursuits. Curiously, she has revealed her hair is naturally silver and she possesses a variety of wigs she wears in public to help her keep a low profile.