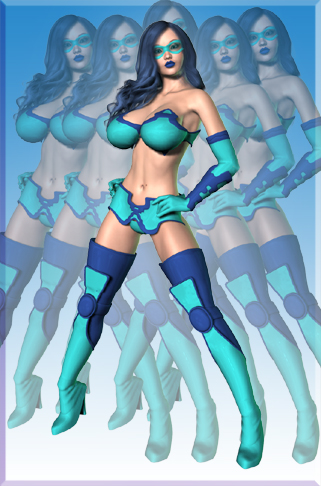 Debbie Diamonte is a self-proclaimed “next hottest thing” and has never shied away from the spotlight. Born and raised in Jock Beach, just north of Metrobay, Debbie and her brother, Douglas, dreamed of stardom and wealth.

Lucky for them, both were gifted with the ability to create duplicates of themselves, as well as gaining national fame on the popular “Jock Beach” reality TV series. However, while Douglas seemed satisfied with his reality TV status, and the wealth and women it brought, Debbie felt she could do more, both to help others as well as to get even more fame as Metrobay’s newest star heroine.

Moving to Metrobay, her talents quickly got her noticed and recruited by the Superheroine Squad. She adopted the name “Projekt” and quickly declared her intent to be Metrobay’s newest star heroine. However, her snobby attitude and scathing Jock Beach personality didn’t do much to gain her any friends right away. 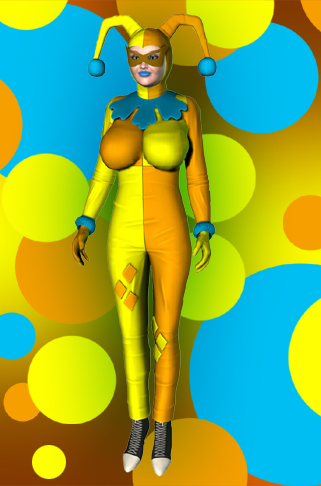 Eventually, she grew tired of the training and mentoring and felt she could prove to them she was ready. Without backup, she went after the Klown Krew, confident she could save the day. She was sorely misguided and, even with her formidable talents, was defeated and captured by Silhouette and processed through a sinister photo-booth to become nothing more than a giggling new attraction to their circus, the bimbo jester now known as Pom-Pom.

Projekt can create duplicates of herself, as many as she likes. However, she is limited by her concentration, as she must simultaneously control multiple bodies at once, with more bodies leaving her more distracted and overwhelmed. However, with practice and discipline, the amount of duplicates she could create is potentially limitless.