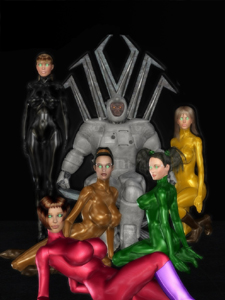 Various women began to suddenly disappear in connection with a mysterious new TV channel, H.E.R.-TV, and the Superheroine Squad sends Brown Sugar and Jade Lightning in to investigate. They stumble upon an enslaved Blackout and a resurrected Sentius in a powerful android body. They are subsequently captured and methodically enslaved along with RollerGrrl, Goldwing, and several civilians in the newly built Conversion Chambers. Shelly Calvin, meanwhile, is punished by Max Indeks for her act of kindness to Silver Satin and forced to be Max’s newest guinea pig for a dangerous experiment that turns her into the powerful and primal Super Freak.