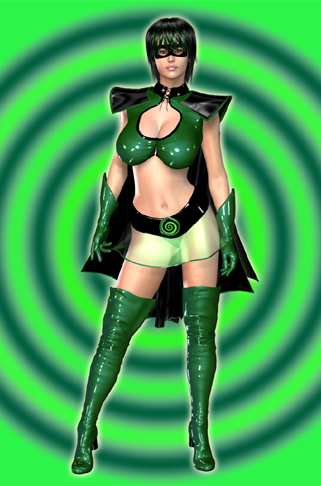 Hypnotica is an unknown commodity in Metrobay, a young woman who appeared almost literally out of nowhere with very little information on her background readily available. She claimed to be Metrobay University student Patricia Summers. She is able to to emit a powerful mind control energy beam from her body, with the source of her powers concentrated in her upper torso.

One day, Hypnotica awoke at APEX Laboratories with newfound abilities, feeling stronger and healthier than she ever had before. How she came to possess superpowers or wound up with Max Indeks at APEX was not immediately revealed, though Max has stated that her powers were a side-effect of treatments to save her life from an accident and that her current condition forbid her from interacting with her family or friends. He claimed that the Superheroine Squad and League of Villains will both be after her because of her powers and offered her shelter from both. As a result, he had arranged living quarters for her at APEX and has given her an outlandish costume he claims will help mask her identity.

Feeling obligated to Max, and unaware of his precarious and insidious true nature, Hypnotica reluctantly agreed to help him spring his associate Troublina out of prison. Upon arriving at the Metrobay Police Department, she encountered Kristen Thomas, unaware that the timid-looking police secretary was truly the heroine Valient Grrl. When her ploy to pretend to be an official superheroine failed, she used her powers against Kristen.

Using Kristen, Hypnotica was able to sneak deep into the police station and was successful in freeing Troublina from her cell. However, while making their exit, she was spotted and recognized by her boyfriend, Officer Mick Jones. Eager to spend time with him after being apart for so long, she sent Troublina to report back to Max and went on the run from authorities with her lover.

When she arrived at Mick’s apartment, however, she discovered that the heroine Snowflake was there and assumed that her boyfriend had been having an affair with her in her absence. She angrily hypnotized the two and then unwittingly made them pleasure her for hours on end before deciding she would be better off heading back to see Max.

Along the way, she was confronted by Valient Grrl, who had followed her trail. In an attempt to restrain her, ValientGrrl accidentally opened Hypnotica’s top, allowing Hypnotica to entrance the powerhouse heroine once more. Unfortunately, her playtime with the heroine was interrupted by the sudden arrival of Snowflake and Troublina. Reluctantly, Hypnotica freed her captive and joined forces with the heroes in the hopes of clearing up all the lies and misinformation she was being fed.

When they arrived at APEX, Troublina led the foursome to a hidden cloning facility. When Snowflake cracked open the nearby computer’s files, it was revealed that Hypnotica is a modified clone of college student Patricia Summers, not the original. Hypnotica vehemently denied these claims, but the truth became apparent when Max showed up to confirm their suspicions. Her creation was the latest result of extensive testing over the genetic material of the original Valiant Woman. With clones branded as unethical and their very existence illegal, Max offered her and fellow clone Valient Grrl amnesty in exchange for joining his team of villains. Hypnotica, however, rejected his offer and chose whatever fate may befall her. Max responded by unleashing a brainwashed Solaria upon the heroines.

Swarmed by security droids and an unleashed Solaria, and inexperienced in battle, Hypnotica was quickly captured and held hostage as leverage to force her teammates to back down. Max then proceeded to bring out a large mirror, stimulated Hypnotica’s powers into activating, and waited as Hypnotica’s powers rebounded back at her, entrancing her deeply. Max quickly set about filling her head with evil intentions, twisting her to suit his needs.

Whatever Max’s intentions were, Hypnotica awoke alongside Valient Grrl, apparently free to fight another day. She made an attempt to integrate herself back into her old “family”, but was plagued by complications and a lack of purpose. Sensing this, Kristen has taken Hypnotica in under her wing and formally inducted her into the Superheroine Squad’s Grrl Power unit, hoping she can steer the young heroine and her powers towards the righteous path.

Hypnotica has adopted the name “Jamie Summers”, named for her great-aunt, and has begun the slow process of building a new life for herself. What her ultimate destiny is remains unknown.