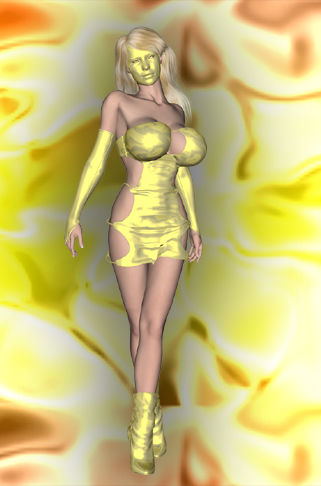 Goldie Gabranthe was always looking for the easy way out. Born into riches and luxury, she grew up spoiled and demanding, her unreasonable demands causing over six butlers and seven maids to quit their service rather than spend anymore time dealing with her.

Her parents were understanding people and, in an endeavor to shape her up and teach her some virtues, they cut her off from their wealth and estate, forcing her to make due on her own.

Rather than learn a valuable lesson and earn her keep, however, she flaunted her good looks and charmed her way into the lives of rich boyfriend after rich boyfriend, draining them dry and then moving on to keep her exorbitant lifestyle going.

She hit the jackpot during a chance meeting with the crime lord Midas Kingston, who possessed the ability to transmute anything he touched into pure gold. Pulling out all the stops, she wormed her way into his life and his heart, until he found himself unable to resist her charms.

With her meal ticket, Goldie knew she could manipulate him into getting her anything she wanted… and under her influence, the already greedy criminal become more obsessed than ever at satisfying both his own needs and her unreasonable demands for more riches. “Golddigger” was born, and through her special boyfriend, all of Metrobay could be hers on a silver… or in this case golden… platter.