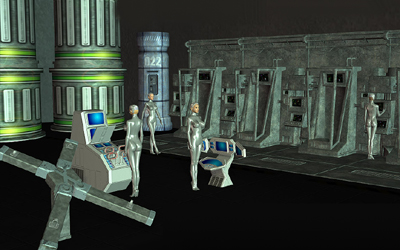 Sentius’s Factory was built inside the shell of an old abandoned military hangar on the outreaches of Metrobay. Once used to house weapons of war and carnage, the structure was renovated using the latest in APEX technology to create a factory capable of converting beautiful women into mindless and obedient drones.

The enormous factory was kept running by standard worker drones called “Robounits” while their “Controlunits” supervised their performance to keep the entire process running at peak efficiency.

The factory was destroyed when Sentius exploded after a battle with Mechana, Silver Satin, Omega Woman, and Dr. Twisted. It was disassembled by technical crews from the Metrobay Police Department and APEX Laboratories and declared off-limits to civilian personnel by Police Chief Coleman and Mayor Turner.