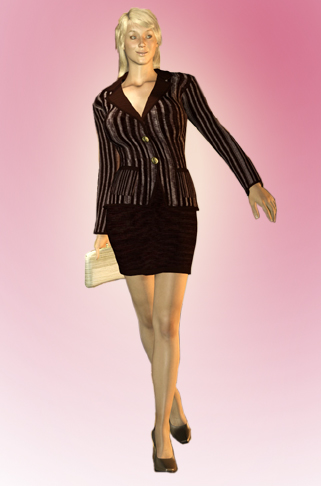 Raquel Summers is a model of dignity, class, and self-respect in a town where those qualities can be hard to find. A beautiful woman who prides herself on staying both physically and intellectually fit, Raquel has worked hard her entire life to provide for herself and her only daughter, Patricia.

She graduated at the top of her class from Metrobay University, working a full-time job to put herself through school and make ends meet. A single mother who had her child at a relatively young age, Raquel has been able to balance her career, family, and social life with grace and elegance.

As a teacher in her school’s science department, Raquel has met many of the key players in Metrobay’s scientific community over the years. She studied under Professor G.E. Petto, was a classmate of Belinda Giolla, interned under Max Indeks at APEX Industries, and even tutored a young Ted Twiss as a graduate student. Now she is witnessing the next generation of brilliant minds come up through the ranks, having had Marcy Smith, Shelley Calvin, and Preston Prescott in her lecture hall.

It is a testament to Raquel’s lovely personality and genuine kindness that she hasn’t gotten caught up in too many of the mind games that seem to go on around town, although in this city no one is immune forever. Raquel was one of several unfortunate victims of the H.E.R.-TV mass enslavement plot concocted by Sentius. Along with her daughter, Raquel was marched out of her home and forced to mindlessly submit to the transformation process, becoming a H.E.R. drone. She was later rescued and freed from Sentius’s control by the Superheroine Squad.