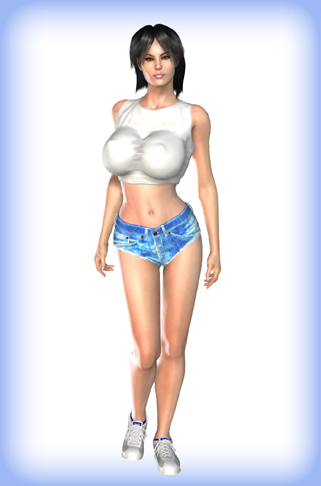 Patricia Summers is your typical All-American girl, born and raised in Metrobay and content to live her life as any college student would. Patricia, or “Patti” to her closest friends, grew up in the southern suburbs of the city and dreamed of one day becoming a famous artist.

Like many of Metrobay’s bright young minds she attends Metrobay University, the center of education, culture, and enlightenment for the entire city. It was at college that she rediscovered another childhood love in the form of Mick Jones, a handsome young man who was from her neighborhood and who she had known on and off for years. The two reconnected through their mutual love of drawing, graphic design, and visual storytelling, and have been inseparable ever since. Even though the beautiful and voluptuous student is constantly being wooed by would-be suitors, she remains faithful to her boyfriend and one true love, a rarity in Metrobay’s tumultuous social climate.

Her mother is Raquel Summers, an instructor at Metrobay University, with whom she shares a strong and loving relationship. Patricia prefers to live off-campus with her mother to save on costs, since the two commute to the college together anyway.

Patricia was one of the many girls abducted and brainwashed by H.E.R.-TV and turned into a mindless slave unit under Sentius’s control, alongside her mother. She was rechristened PS-0021 and forced to assist in his scheme to enslave the city before she was saved by the Superheroine Squad.

Not long after, she was kidnapped by Dairy King and brainwashed by his thrallium-equipped android doll MilkMaid. She was hooked up to strange machines and subsequently had her breasts milked. Dairy King’s reasons for this unorthodox criminal activity were never clearly known, but Patricia remained his mindless prisoner for a time. She had been designated for “repeat harvests” and had apparently been genetically modified to yield high milk production, despite no history of it prior to her enslavement. She was subsequently forced to work as a “Sweet Tart” in the company store as well as stand guard and ward off unwanted visitors, at least when her master was absent or she was awaiting her turn to be milked. She was later incapacitated by American Amazon and it is implied she woke up later with no memory of her ordeal.

Recently, Patricia appeared to have inexplicably wound up in the hands of Max Indeks and APEX Labs and awoken from a coma with newfound, hypnotic powers. This later proved not to be the case, as the woman believing herself to be Patti was in actuality her genetic clone, the APEX-created Hypnotica. Patti thus far is unaware of her clone’s existence.

Patti’s poor luck continued when, during a visit to Metrobay Police Station to see her boyfriend, she became lost and stumbled upon a greentooth-enslaved Brown Sugar, who had received instructions from her master Vic Reno to enslave certain women on a list of suitable candidates. Patricia’s name was listed, and she wound up seduced and similarly enslaved by Brown Sugar and spirited away to work at Headlights as an obedient Headlights Hottie.

In general, Patricia appears very laid back and easy-going, and her revealing and casual wardrobe often reflects this. Her boyfriend claims she has “healthy” sexual appetite, and though she appears to be more comfortable dressed down than dressed up, she still manages to stay fit and classy. She’s been said to be uncomfortable letting others touch her hair, but that didn’t stop Sentius from shaving it all off when he enslaved her. Thankfully, it grew back quickly while she was in a stasis pod awaiting her turn to be cured of her implants.