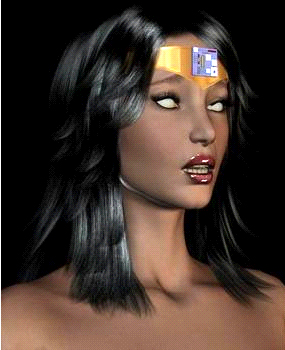 While working on upgrades for the Control Collar that Dr. Twisted used to subdue Brown Sugar, Max Indeks was contacted at APEX Labs by Dr. Jan Wellers and her cohort, Dr. Dan Digitalus from the Department of Defense. They were assigned to a special task force by the President to investigate the super heroine, American Amazon, then known as “Freedom Broad”. After learning of Max’s desire to understand Dr. Twisted’s  invention, they asked if they could assist Mr. Indeks in developing his own Control Collar in exchange for developing a side project specifically for their task force. They requested the construction of a simple chip device that would bend a strong willed mind into complete submission.

The Submission Chip, or “control chip”, functioned similarly to the Control Collar. Once in contact with a person’s forehead, it interfaced with the subject’s mind through the frontal lobe of the cerebral cortex and began to interfere with the subject’s neural thought patterns. If the person in contact with the chip has been overwhelmed by stimuli and their mental resistance is low enough, the chip could begin to re-code those thought patterns and easily restructure the mind’s beliefs, perceptions, and understandings. In a sense, it did more than override cognitive thought; it reprogrammed the mind, as much as the mental resistance will allow. After several encounters with the chip, or if all resistance is previously eliminated, complete control of the subject’s mental essence could be achieved.

Coinciding with these events, F.I.A. agent Anna Creech received a tip that expensive electronic parts were being smuggled from Metrobay into the Capital City warehouse district. She went out as a snooping American Amazon to investigate. Overhearing an APEX Lab employee talking to a tall slender man with big hands and a lab coat, she took note the conversation concerned Mr. Indeks’s research on the new version of Dr. Twisted’s Control Collar and how it would soon be ready for a field test. American Amazon thought it a good idea to collect all the information she could get on Max Indeks, She made a mental note to for Anna to start a government file on Mr. Indeks and APEX Labs. 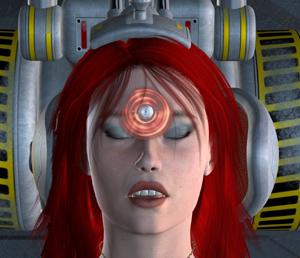 Ironically and unbeknownst to her at the time, American Amazon would be tricked into becoming the test subject for the new mind control technology device, falling victim to its powerful influence and paving the way for further brainwashing and indoctrination.
Satisfied with the success of the device, various prototypes and templates were sent to interested parties, including the likes of Adriene Herrin. The experiments also caught the eye of the Lambda Syndicate, which instigated their mission to capture Adriene and subjugate her captives, Notre Dame and Sparrow, to her own modified version of the submission chip.