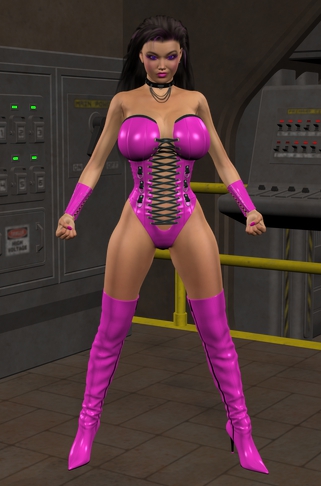 The offspring of noted historian, Charles Lenoir, and high-class call girl, Min Jee Park. Soon after she was born, her mother disavowed any connection to her daughter and labelled Luna a “mistake” and an “abomination”. She was raised by her father until the age of fourteen when he disappeared under mysterious circumstances, making Luna a ward of the state.

Luna has always exhibited above-normal intelligence, a trait that earned her a scholarship to Metrobay University where she studied in Biochemistry and Genetics. However, during an experiment conducted by the superheroine Honeydoll, Luna was exposed to a dangerous chemical reaction. Soon after, Luna began developing bizarre mental powers along with a crippling addiction to superheroine breast milk. 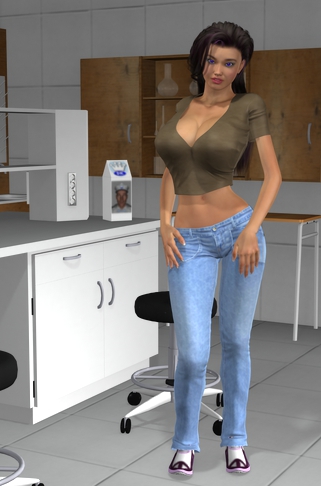 Under the tutelage of Dr. Lactatia, the darkest aspects of Luna’s personality were nurtured and thrived. Blaming not only Honeydoll, but all the superheroines of Metrobay for her milk addiction, Luna adopted the moniker of a villainess named Synapse and spent the next few years honing her powers and plotting revenge. These plans were subsequently derailed once she developed feelings for a bimbofied clone of Honeydoll.

Synapse has the ability to greatly diminish the intelligence of anyone nearby to the point that all cognitive brain activity completely shuts down and the victim is reduced to a mindless husk. This power is passively activated and constantly in effect unless Synapse mentally chooses to turn it off. Synapse also has the ability to temporarily alter her victim’s thoughts to suit her purposes through physical contact, preferably an open-mouthed kiss. Once initiated, the victim will think, feel and believe whatever Synapse desires. In addition, Synapse has been known on occasion to mimic the powers of a superheroine by ingesting ample quantities of their breast milk. Although, this has come with unintended consequences.