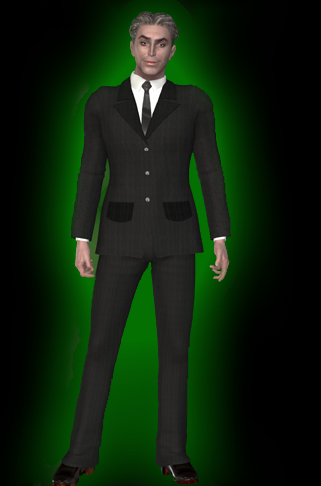 To the general public Max Indeks is many things… wealthy, powerful, influential, intelligent, perhaps even handsome. With his seemingly endless supply of energy he is a borderline workaholic, seeing to company matters during the day and pursuing personal interests when the sun goes down.

What the public doesn’t see, and what Max doesn’t want anyone to know about, is the true nature of his well-hidden personality. Never has a more evil, power-mad, depraved, heinous, ruthless, cunning, shallow, diabolical, callous, perverted, egomaniacal, and self-centered individual ever set foot in Metrobay. He thinks he can do what he wants when he wants, and with the corrupt Metrobay legal system under his thumb he never seems to have to answer for his numerous crimes.

The Superheroine Squad is no longer fooled by his charade and they have vowed to someday make him pay for his numerous crimes and acts of scandalous depravity against the good citizens of their fair city.

Max has been the mastermind behind several large-scale criminal activities since he arrived in Metrobay. He inherited APEX Industries from the late “Old Man” Wellington, quickly turning it into a successful and flourishing mega-corporation. It was this successful entrepreneurial endeavor that made Max the wealthiest man in town and he was voted in as leader of the criminal Circle of R.O.P.E. in the absence of its previous leader, Draven Ophidian. Max has proven to be just as shrewed and ruthless in this role as he is in any other.

Max publicly appeared to “settle down” when he married his wife, Vivian, though in reality she is as deplorable and despicable as he is. Though both seem to genuinely have affection for each other, neither is particularly faithful and both seem fully aware and indifferent to each other’s infidelity.

It has been shown that though Max prefers to use hired help and other associates to do his dirty work, he is not above getting his hands dirty. Max has expressed a passionate interest in various secret identities going so far as to dress up as Vermin, Syman Sayz, and Black Hat, and fashioning his own, such as El Jizmo. He’s even resorted to a simple pair of glasses as a practical disguise.

Max Indeks has developed many adversaries through his unethical misdeeds, though he holds a special deep-seated hatred for the superheroine Pink Pussycat and her unfailing attempts at shutting down his various criminal operations.