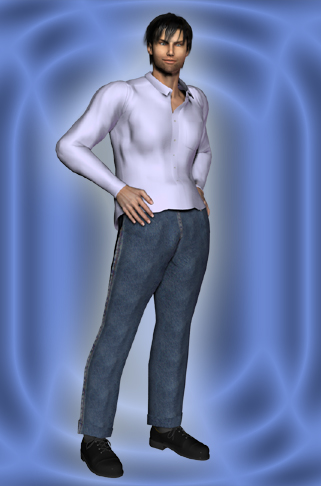 Shawn MacGilleycuddy is a Metrobay University student. His sister is Maggie MacGilleycuddy, a well-respected police officer with the Metrobay Police Department.

As kids, he and his older sister often got into trouble. Maggie eventually grew out of her rebellious phase… but Shawn continues to get into trouble on occasion.

Shawn was dating Angel Gold, unaware she is actually the heroine Goldwing. She grew jealous (and intrigued) at his interest in Goldwing herself and decided to spice up their love life by having her friend, Enchantress, roleplay a naughty hypnosis session with them. The session grew out of control, however, when Enchantress did TOO good a job at convincing Goldwing to serve her boyfriend, who was overjoyed at the idea of letting go of his inhibitions, resulting in Enchantress joining them.

At some later point both Goldwing and Enchantress were freed from their hypnotic control, and Angel, justifiably, broke up with Shawn, barely stopping an enraged Enchantress from turning him into a frog. He’s since kept a low profile.