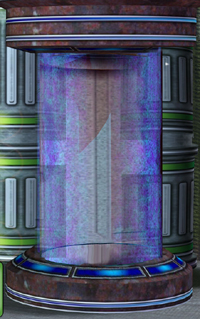 A special holding cell was developed for the Metrobay Police Department under the guidance of Marcy Smith. In a city full of superpowered individuals, the cell was created to incarcerate supervillains whose abilities made normal prison cell blocks obsolete. The holding cell is a highly advanced piece of equipment which utilizes indestructible force field technology to ensure that even the strongest villain would be incapable of breaking out. It also utilizes anti-gravity technology which prevents the prisoner from gaining a solid foothold or finding leverage to try and escape, leaving him or her floating in an unbreakable prison.

Ironically, Marcy’s own invention was used against her by Sentius, first to ensnare and convert a luckless cop into a cyborg, and then to restrain her and convert her into a human robot herself.

Afterwards, the cell was used to temporarily restrain the android Mechana during a period of study and observation in Silver Satin’s Crime Lab.