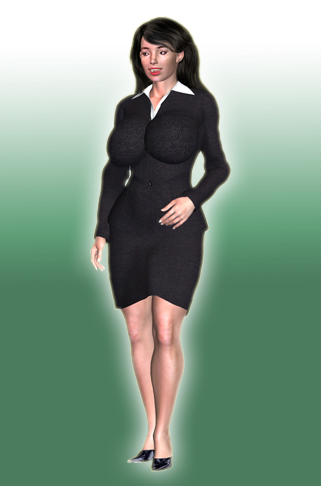 Elizabeth Trance is the sweet, romantic, yet domineering wife of Professor Lorenzo Trance. The couple met while Lorenzo was vacationing in London, England after Lorenzo had swindled thousands of dollars from the Somno Sorority.

While in a pub, Lorenzo became quite intoxicated and fell for the advances of the native-born Liz. While he assumed it was to be a simple one-time fling, she apparently thought quite differently and he was soon pressured into further dates, an entire courtship, and ultimately marriage.

When Lorenzo’s funds started to run try, he and his wife moved back to Metrobay, where he began his teaching job again while Liz found employment at Luxuria Perfume as a beautician under Ava LaPette’s watchful eye.

While Lorenzo is at heart a selfish, immoral, depraved man, Liz is an enthusiastic and almost child-like romantic who is ignorant of his lesser qualities and entirely unaware of his criminal past. Her idealized marital views, which are quite conservative, especially in Metrobay’s vicinity, have placed a strain on the marriage she fails to notice while Lorenzo’s bitterness at her increasingly unrealistic expectations have caused him to fear and loathe his beautiful significant other.

Recently, Lorenzo has smuggled home the hypnotized form of Spellweaver, a former student of his, and had attempted to keep her hidden from his meddling wife. When she stumbled in on his affair, Spellweaver’s magical powers enslaved her as well and she awoke in the morning with no memory of his infidelity or her own submission.

Events proceeded with more frequent oddity at the Trance’s home until Liz rediscovered her husbands hypnotic affairs and phoned the Superheroine Squad to come investigate. She was discovered and enslaved by Spellweaver and made a slave to her husband once more, serving him dutifully and lovingly until he had hidden himself in his old lab.

Liz was freed from her entrancement when the heroines Enchantress and Goldwing broke the spell over her. She heard Lorenzo deliver a scathing rant to the heroines, revealing his true colors to his love-blind wife, and she responded by knocking him unconscious before the Metrobay Police Department locked him up in the Funhouse.