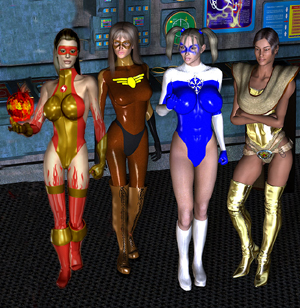 Grrl Power is a splinter group of young superheroines that gather to fight crime under the watchful eye of the Superheroine Squad. Most of the members are inexperienced and unskilled, often fresh from thePolice Academy and enrolled at Metrobay University. They all are considered to possess great potential to become leading figures in the superhero world with time and persistence.

Notable members of Grrl Power include Blackout, Goldwing, Snowflake, Solaria, Spellweaver, and Hypnotica, with Solaria often serving as de facto team leader. Jade Lightning and Valient Grrl are unofficial part-time members of the team, and are always happy to lend a hand should their younger counterparts find themselves in need.